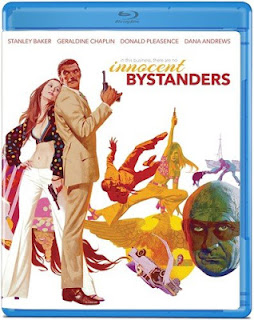 Wow! I never really expected to see Innocent Bystanders on DVD, let alone on Blu-ray! But in early 2013, Olive Films will release the 1972 spy film starring Stanley Baker (The Man Who Finally Died), Donald Pleasence (You Only Live Twice), and Sue Lloyd (The Baron), on both DVD and Blu-ray. And that's awesome. Innocent Bystanders was directed by The Italian Job's Peter Collinson and based on a novel by Callan creator James Mitchell. (Mitchell wrote several books about secret agent John Craig, played by Baker in the film.) Bond veterans Vladek Sheybal and Cec Linder also appear. This violent tale of betrayal and espionage is one of the most sought-after titles among spy fans of this era, and I can't wait for this release on February 19, which will be in 1.77:1 widescreen. In the meantime, you can now stream the fullscreen version on Amazon. Now if only someone would give us a Region 1 release of the Callan movie!
Posted by Tanner at 12:34 AM

I'm pretty sure that Robert McGinnis did that wonderful movie poster.

Yeah, I think you're right. At first I thought it looked like Peak (more his sort of composition, though the women defintiely look like McGinnis women), but when I Googled it last night I couldn't find any info to support that. Whereas there are a few online claims that it's McGinnis, which makes sense. Either way, though, it's great art, and I'm glad Olive is using it for the cover!

I agree that it looks more like McGinnis than Peak; it doesn't have the glistening quality that Peak's work often has. Anyway, color me surprised and rather pleased, not merely that it's going to Blu-ray, but also for what it might portend for the future. Could Blu-ray or at least DVD releases of other neglected spy gems from the 70s be far behind? I'd love to see Night Flight from Moscow, Russian Roulette and Permission to Kill someday...

Ah, Dirk Bogarde; how I love the man! Night Flight from Moscow's on DVD; I own it! Check Amazon. I'd love to see a legit release of Permission to Kill. I'm surprised no one's released that one yet given the presence of Dalton and a Bondian title... they might be able to fool someone into thinking they were buying a Bond movie. I've never seen Russian Roulette. I take it you recommend it?

I wish I could recommend Russian Roulette -- but I haven't seen it! I so loved George Segal's performance as my namesake in The Quiller Memorandum that when I found out that he'd starred in another spy/intrigue-themed actioner I thought, "I have got to see this!" Well, that was years ago, and I've never been able to locate it on TV or in a VHS copy. Hence my hope that Innocent Bystanders's impending home video debut portends that other spy films from the period that I've always wanted to see are on their way.

And let it be said that while Segal certainly didn't play Quiller as Elleston Trevor conceived the character, his low-key, workaday, engaging characterization was nonetheless perfectly suited to screenwriter Harold Pinter's reimagining of the material as a quintessentially "Pinteresque" meditation on the brutality and inhumanity of the spy business. The Quiller Memorandum is one of the few examples I can think of in which the filmmakers completely rethought the novel they were adapting -- and it actually worked just as well.

Since you mentioned Dirk Bogarde, you know what I'd really like to see on DVD or Blu-ray? Sebastian. I've heard of it turning up really late at night on TCM, but usually when I have to work the next day. I've always wanted to see that one. Good to hear that Night Flight from Moscow is on DVD, I'll definitely check Amazon.

Quiller,
Take a look at ImportCDs.com, for a better price than Amazon, for Night Flight from Moscow. I've had good luck with their company.