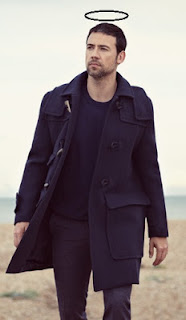 Well, here we go again! After stops and starts for the last half-decade (at least!), a new version of The Saint is once again up and running. Hopefully for real this time! And Adam Rayner (who co-starred on the recent Cinemax spy series Hunted) has been cast as the newest incarnation of Simon Templar. Leslie Charteris' debonair thief with his own strict moral code has been played over the years by (to name just a few) George Sanders (in a fun series of 40s B-movies), Roger Moore (in the awesome Sixties TV show, which remains the most famous incarnation of the character), Ian Ogilvy (in the Seventies reboot Return of the Saint) and Val Kilmer (in the disappointing 1997 feature version). Five years ago, James Purefoy was attached to a new TV version which fell through, and then attached again to star in a TV movie/backdoor pilot last year... which also fell through. In the interim, we also heard Dougray Scott's name mentioned. But hopefully this Adam Rayner version will actually happen. It sounds closer to being a reality than any of the prevoius versions! According to Deadline, Simon West (The Expendables 2) will direct the Rayner pilot... and it's set to start shooting later this month! Alias writer/producer Jesse Alexander wrote the script and executive produces; Brad Krevoy produces. Roger Moore was involved in a producing capacity in previous revival attempts, but there's no word now on whether or not he's involved in this version. (It would seem like a possibility, however, since he previously worked with Krevoy on A Princess For Christmas and Boat Trip.) There is no U.S. network involved yet, but the plan is to shop the completed pilot.

The Saint is not a spy, but he's had plenty of espionage experience nonetheless in his history in print and on screen. It sounds like this version of The Saint will play up the espionage angle. According to the synopsis reported by the trade blog, "A master of disguise, improvisation, martial arts, firearms and espionage and the quintessential English gentleman, [Templar] is hired by certain government agencies for special assignments."

This isn't the only Saint production in the works. In January, RKO announced plans to remake one of their Saint features... but supposedly their rights preclude them from altering any of the 30s or 40s dialogue, and restrict them to the brief running time of the originals, so I'm not sure how far they'll get with that.
Posted by Tanner at 2:50 PM

Roger Moore so owned this role that anyone else was, and will be, a pale imitation. Sanders was also enjoyable to a much lesser degree. A local TV station reruns the show 5 nights a week and I find myself glued to the set if it's on.

The pilot has already been shot... so technically, this Saint project HAS happened. What hasn't happened yet is the series that they want this to lead to.

In your list of Saint actors, you left out Louis Haywood, Hugh Sinclair, Andrew Clarke and Simon Dutton, to name a few.

Thanks for stopping by, Lee! That's actually an old story, from December 7, the week they started production. After all the fits and starts this project has gone through over the years, I didn't want to jinx it by counting any eggs before they hatched! Thankfully, as you point out, the pilot is now wrapped and made. Now we only have to hope that 1) a network picks it up to series(!), and 2) should that not happen (God forbid), at least the pilot gets aired or released on DVD so that Saint fans can all see it! Of course I'm hoping for 1 considerably more than 2. Fingers crossed!

As for those other actors (some of whom I like quite a bit in the role), you'll find plenty of other stories about them by clicking on the "Saint" label. But I'd mentioned them all enough other places that I felt it was better not to do the whole litany in this news item. After all, now it's Mr. Rayner's time to don the halo, and I think he's got enough Sainted forebears scrutinizing his performance (some very materially!) without my invoking more!

I can't wait to see what he does with the role though. I remain very, very excited about this project!