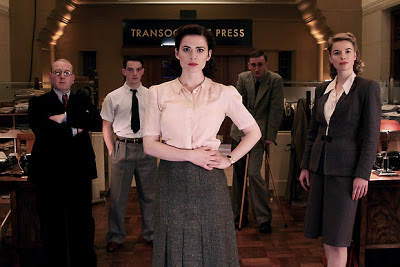 The BBC/Sundance co-production of William Boyd's Restless announced last summer airs tonight in America on The Sundance Channel. Captain America's Hayley Atwell (the best part of that lousy Prisoner remake, which she later disowned) and Downton Abbey's Michelle Dockery (seen briefly in Hanna) star alongside Michael Gambon (Page Eight), Charlotte Rampling (The Avengers episode "The Superlative Seven") and Rufus Sewell (The Tourist) in a WWII-era spy thriller based on a novel by future James Bond author William Boyd (Any Human Heart). (For the record, I'd happily back either Atwell or Dockery as future Bond Girls.) Boyd penned the screenplay, based on his own novel of the same name. (He also adapted his novel Any Human Heart in 2010; that miniseries also starred Atwell and featured Tobias Menzies as Ian Fleming.) Boyd was announced earlier this year as the next James Bond continuation novelist, so Bond fans eager for a taste of his spy writing might want to check out this miniseries.

In Restless, Dockery plays a woman in 1979 who learns that her mother (Rampling) has been living a double life and is really a former spy for the British Secret Service. In flashbacks to 1939 Paris, Atwell plays Rampling’s younger self who’s recruited into the service by and falls in love with Sewell’s spymaster. After a crucial mission collapses, she must go into hiding, but 30 years later wants to resurface and enlists her daughter to track down her former lover, now played by Gambon. Part 1 airs tonight, Friday, December 7, at 9PM on Sundance; Part 2 airs next Friday, December 14, at the same time. Watch the trailer below:

I watched the first part of this, and I have to say it's fantastic. Tonight they air Part 2, which I will record and watch throughout the week. Also, check out that soundtrack. Do I not hear Tinker, Tailor, Soldier Spy (1979) in those grooves?