Despite the somewhat perplexing title, this low key spy story (enterprisingly billed by publisher Boom! Studios as "a gritty, dark espionage thriller like Casino Royale") turned out to be a pretty good read in its first issue. Eric Westfall is an agent pulled out of retirement (and a seemingly happy family life) in order to track down and, if necessary, kill, a former colleague–and former lover–who has gone rogue. Westfall’s ex, Emma, for whom he clearly still harbors feelings, is holed up in Cuba with a laptop full of field agents’ names that she apparently plans to sell to the highest bidder. Our hero is unhappy to discover that his agency has sent another operative, a borderline psychopath named Painter, to babysit him on his mission. But when the two agents pay a visit to Emma’s alleged Havana hideout, they get more than they bargained for.

A lot happens in the first issue, but it doesn’t turn out confusing like so many ambitious comic book debuts these days. Writer Chip Mosher is an economical storyteller, letting just a few effective flashback panels tell us everything we need to know about Westfall’s wife and home life, rather than waste unnecessary pages developing this background. Some of the dialogue’s occasionally a little clunky, but the plot unfolds at a good, brisk pace. Mosher is aided immeasurably by artist Francesco Francavilla (somewhat reminiscent of Guy Davis or Leo Duranona), who imbues his characters with visible, believable emotions, and makes those flashback panels work. Along with the equally impressive colorist, Martin Thomas (whose work reminded me of the coloring on '80s Tim Truman stuff, leading me to realize that it was Thomas who colored Truman's Grimjack!), he manages to convey a consistent mood and a great sense of place. I’ve never been to Havana, but this is exactly how I imagine it. 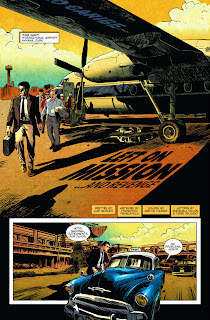 I bought this book on a whim, eager to sample a new spy comic, but not really expecting to come back for more. The first issue turned out to be intriguing enough to ensure that I will, though, leaving me invested in the main character and curious to see what happens next. Plus, it ends with the promise of another exotic location, and I’m excited to see how Francavilla and Thomas depict it! Like most intricate spy thrillers, Left On Mission will probably work best read as a trade paperback (if sales are good enough to merit such a collection), but if every issue is as well constructed as #1, then it should make for a great serial read as well. I'm in for the long haul.

They've posted 14 pages of this issue as an online preview here and you can watch a "trailer" for the comic here!
Posted by Tanner at 11:01 PM

Email ThisBlogThis!Share to TwitterShare to FacebookShare to Pinterest
Labels: Comics

Thanks for the great review. Glad you enjoyed it. It has been a joy to make. Francesco is a dream to work with and topped off with Martin's colors - exquisite.

Issue 2 comes out this Wednesday - a quirk of issue 1 being delayed at the printer - so you will get a double dose this week!

Thanks for stopping by, Chip, and leaving a comment! I loved your comic and I'm definitely looking forward to #2. (Unfortunately my local shop, Golden Apple, didn't actually get it in this week, so hopefully next...)

Memorial Day weekend messed with the distro this week. Hopefully they will have some in tomorrow.