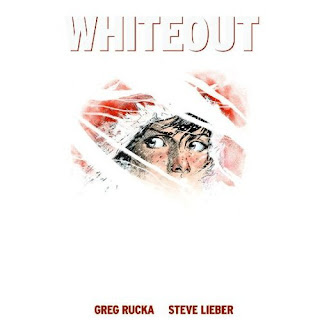 More Whiteout This Fall
A few weeks ago, on Free Comic Book Day, Oni Press put out a free reprint of Whiteout #1 by Greg Rucka and Steve Lieber. At the end, Oni Editor-in-Chief James Lucas Jones explained that the freebie was to promote a new, re-mastered Whiteout trade paperback collection. "We’ve gone back to all the original artwork from the book and given it some extra loving," he wrote. "We’ve upgraded the paperstock to one that’s as white as the snow raining down on Carrie. And we’ve added a new afterword to boot!" He goes on to announce that there will also be a new definitive edition of the sequel, Whiteout: Melt and, most excitingly, an all-new miniseries this fall, Whiteout: Thaw. He doesn’t actually state that the third story will be written by Rucka and drawn by Lieber (whose unique, retro artwork is as integral to the comic as Rucka’s sharp writing), but I can’t imagine they’d do one without those two key creative forces.
While the heroine of Whiteout, Carrie Stetko, is a U.S. Marshall, and not a spy, so far both Whiteout stories have included a good deal of espionage. (Carrie joined forces with a British agent in the first one, and a Russian one in the second.) I think it’s safe to expect the same from the third, and if not, the character and the setting are more than enough to make a worthwhile read. Stetko is the lone American law enforcement officer stationed in Antarctica, and the crimes she investigates tend not only to put her in serious personal peril (wait till you see what the title actually refers to!), but to spark international intrigue amongst the various nations with bases on that icy continent.
The first Whiteout miniseries also introduced a tall, blond MI-6 officer named Lily Sharpe who is to Queen & Country’s Tara Chace at least what John Drake is to Number Six, and probably more. Queen & Country was initially announced as a spinoff from Whiteout, but Sharpe’s name was changed to Chace, presumably to create enough deniability that the character wouldn’t be tied up in the Whiteout movie rights, and could be optioned separately. As it stands, the Sharpe character appears to have been completely cut from the Whiteout movie anyway, or possibly turned into a male character. Whiteout is currently filming in Canada starring Kate Beckinsale.
Posted by Tanner at 12:01 AM