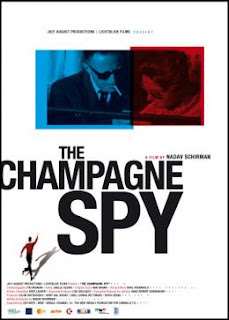 Nadav Schirman’s excellent documentary The Champagne Spy tells the story of Israeli spy Ze'ev Gur Arie, aka Wolfgang "Wolf" Lotz. Lotz posed as a German ex-Nazi living the playboy lifestyle in ‘60s Cairo while his wife and young son waited patiently in Paris. (Owing to the great difficulty in running spies directly from Israel to Egypt, Paris served as the European headquarters of the Mossad at the time.) It’s not so much the story of his actual spying, but the story of his descent into his double identity, and the havoc that wreaked on him and anyone close to him.

The central interviewee in the documentary is Oded, Lotz’s son. Young Oded took Super-8 home movies of his father’s visits (Lotz would return to Paris every five or six months to report to his handlers and see his family) and allowed the filmmakers full access to this footage. As an adult, Oded revisits some of the sites of his childhood, and you can see the memories flooding into his eyes–the ones he shares, and the ones he doesn’t.

Schirman also had unprecedented access to former Mossad agents, Lotz’s colleagues and handlers. Despite one handler’s assertion that it was always best for an agent to keep his family in the dark about the true nature of his frequent business abroad, Lotz ignored that advice and told his young son exactly what he did on one return visit. "You can’t tell anyone," he cautioned him. "My life depends on it." And so Oded was burdened with the huge secret–and responsibility–he would carry throughout his youth. Still, at that point it felt good for him being let in; it made him feel closer to his father. When they went to see From Russia With Love together on one visit home, his dad told him the real life stuff was much more interesting.

In Cairo, Lotz lived as a German horse breeder in a community of German scientists who were helping Egypt develop weapons of mass destruction to use against Israel. He enjoyed the high life–the gambling, the clubs, the women. His handlers worried that he was enjoying it too much, but he was far too ensconced in the community to remove such a valuable asset. Eventually, against his handlers’ wishes, Lotz went so far as to marry a young German woman, Waldrud, in his cover identity. The Mossad did not tell his actual wife.

When Lotz and his new wife were arrested as spies, it was reported in world newspapers. Oded saw the headline first, and it fell on him to break the news to his mother that her husband had another wife. She refused to believe that Waldrud was anything more than a fellow agent the Mossad had assigned that cover to. She and Oded kept vigil for years, praying that Lotz would one day be released, but unable to speak of him to their friends. The only reason he avoided the death sentence in Egypt was because his cover was so good. They believed that he was actually German, not Israeli. If Oded spoke to anyone about his father and revealed the truth, he risked dooming him.

When Lotz was finally released, his Israeli family was relieved, but forced to face the truth; he had slipped further than they could imagine into his fictional identity, and he loved another woman, another wife. Schirman’s film only becomes more fascinating once Lotz is released. Obviously useless as an agent after being so publicly exposed, he had a difficult time adjusting back to his real life. He was used to the high life and tried to continue to live it, but with the Mossad no longer picking up the tab for such lavish expenses, he went heavily into debt, and actually ended up working in a department store at one point.

It’s an angle I’ve never seen a spy film take before. What happens to an agent accustomed to the James Bond lifestyle when they can no longer afford it? (Well, to those few agents ever lucky enough to live it at all, I suppose!) What happens to a man who is more used to a blown undercover identity than to his own? What does that do to his relationships with superiors, friends, wives and son? The Champagne Spy is a fascinating examination of such a man told by those who knew him best–or perhaps not at all. It’s the story of a son coming to grips decades later with his complex feelings about his father, a man he revered as a hero, but couldn’t forgive for what he did to his family. For anyone with interest in real life espionage and the toll it takes on its practitioners, this documentary is worth seeking out. It’s playing the festival circuit right now, but it’s such a good movie that it’s bound to get a release deal of some sort, possibly limited theatrical, definitely on DVD.

And for those who prefer narrative features to documentaries, Schirman has already signed a deal to turn The Champagne Spy into a fictionalized English language feature. During a Q&A at the Los Angeles Film Festival this past weekend, he told the crowd that the feature version would have a different hook. Instead of taking the son’s point of view, it will be told from the point of view of the young German wife, Waldrud. She meets a charming stranger on a train, and he whisks her away into the seductive scene of the Cairo jet-set. Then she slowly learns his true identity, and gets caught up in a world she never imagined... Sounds like the makings of another good movie!

Schirman had other interesting things to share as well. The making of the movie, if he’s to be believed, is almost as incredible as the story it tells. The director found a book Lotz had written, also called The Champagne Spy, in a used bookstore and couldn’t believe the tale it told. The book had been out of print since the early seventies, but he tried to track down the film rights by contacting publishers on three continents. In all cases, the rights had reverted to the author. Tracking down the author himself proved even more difficult. Some people told him Lotz was running guns in Australia; others said he was training mercenaries in South Africa. When Schirman discovered Lotz was actually dead, he was about to give up but for a chance meeting at the swimming pool.

Schirman was sitting poolside while his son took swimming lessons when a stranger sat down beside him. The stranger asked him what he was working on, and he told him. The man was interested. A few days later, Schirman received an anonymous phone call telling him how to get in touch with Lotz’s son and executor of his estate. By pure coincidence, the stranger at the pool had been a former Mossad agent himself! That man was later instrumental in lining up interviews with other intelligence officers. Apparently the Mossad, an organization more secretive than the CIA, gave Schirman fuller cooperation than they’ve ever given any filmmaker before. When a viewer asked Schirman how he managed to track down so many spooks, he answered, "Networking." Apparently Hollywood isn’t so different from the shadowy world it so often portrays!
Posted by Tanner at 12:36 AM

truly an amazing movie! A must see!