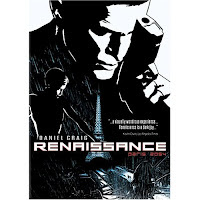 Spy DVDs Out This Week

Renaissance
Many people will have the opportunity to see a fantastic Daniel Craig action/spy thriller for the first time on DVD, since its theatrical run last fall was so limited. The awesomely stylish, stark black and white use of motion capture animation creates a futuristic noir world (well, city, anyway: Paris in 2054) as the backdrop for industrial espionage in Renaissance. Miramax's new DVD includes the original French language audio track, but spy fans will probably opt for the English option, whose impressive voice cast includes Craig in the lead as well as Tomorrow Never Dies baddie Jonathan Pryce, Ian Holm and Catherine McCormack. There's also an in-depth half-hour making-of that goes out of its way to establish that the filmmakers began their process well before Sin City stole their thunder, but it really needn't because the two movies actually have radically different styles. Renaissance's is much more high-contrast, eschewing all shades of gray altogether, and ultimately looking more like a page of Frank Miller's famous comic than his and Robert Rodriguez's film of it!
The Bourne Files
Universal repackages the first two Bourne movies in a pretty neat new case as The Bourne Files just in time for the third film, The Bourne Ultimatum, to hit theaters. The set also includes a bonus disc with all-new features on author Robert Ludlum and a peek at the new movie, and "cinema cash" to see Ultimatum for free.
Posted by Tanner at 3:10 PM

I've been wanting to see Renaissance. It looked fascinating. Of course having Daniel Craig in it makes it that much better.