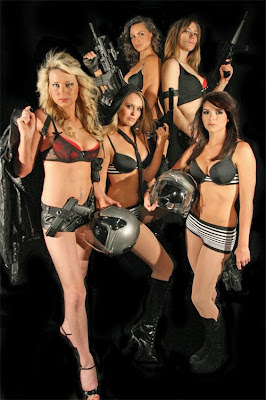 Theater Review: "The Burlesque Of Bond"

Last weekend I finally made it down to Orange County to see director Brian Newell’s "Burlesque of Bond" show at the Maverick Theater. The concept ("Bond Girls" per-forming burlesque numbers reminiscent of the opening titles of the films to their theme songs) is an excellent one, but could have easily gone either way in execution. I’m happy to report that Newell and his per-formers pulled it off!
"The Burlesque of Bond" is an impressively mounted production. Four female dancers (the night I saw it, anyway; five are credited in the program: Amanda Hatch, Lisa Stier, Alyssa Marie Webb, Lisa Marie Crisci and Whitney Finell) perform well-choreographed, tasteful stripteases (no actual nudity here!) inspired by the film whose song they’re dancing to. None of the women appeared to be professional burlesque dancers, but all of them were certainly game and gave it their all. The choreography may not have always been in perfect synch, but the performances were nonetheless uniformly praiseworthy, aided by top-rate production design.
Some of the numbers were performed behind a semi-opaque screen with video images projected on it. (Make sure you select a seat at a middle table for optimal view.) The Maurice Binder-inspired video was so expertly shot that for a moment I wondered if they were actually using snippets from one of Daniel Kleinman’s recent title sequences! The dancers on stage interacted perfectly with the foreground video elements and sparse-but-appropriate sets and costumes to create a vibrant, live action version of a James Bond title sequence. Of course, none of that would have worked were the singers not up to the unenviable task of belting out the very difficult vocals made famous by the likes of Shirley Bassey and Duran Duran... and, fortunately, the were! Two vocalists–a man (Ryan Coon) and a woman (Rebecca J. Hyrkes)–sat in with the band mostly out of sight on a platform raised above the stage. Hyrkes was especially impressive, coming up short only on Goldfinger, a song so difficult–and so identified with one inimitable voice–that few have ever attempted to cover it. Her best performance of a stellar batch came on that other "gold" standard, Goldeneye. (The Man With The Golden Gun was omitted, so we didn’t get to see any dancers interpret the inane lyrics, "Who will he bang? We shaaalllllll seeeeeeeee!")

In true burlesque fashion, the whole evening was hosted by two goofy secret agents in tuxes (Nathan Makaryk and Sean Coutu) with over-the-top British accents of the Bertie Woosterish "jolly good show!" variety. Their jokes consisted mostly of intentionally terrible puns, and the fact that about half of them hit and half fell flat felt perfectly appropriate for the occasion. Highlights included a routine about ordering drinks ("I’ll have a Smirnoff Ice... open, not closed. You don’t want to shake this! I’d end up with sweet but delicious beer all over me.") and a lengthy dialogue utilizing every Bond title, chronologically, in increasingly tedious puns ("Make sure your gun is cocked..." "Oh, pussy!"). Low points included a joke about a tuxedo designed by Q that enabled its wearer to urinate without removing it. This music hall banter came in mercifully short segments between the dance numbers.

The show opened with the four Bond Girls (each given a name that leaned more toward the burlesque than the Bond (but could fit either in a pinch), like Keena Klimax or Ida Luvlong) firing at the audience and then removing some clothing to the Parodi/Fair version of the James Bond Theme from the Goldeneye trailer. After that, some numbers used all four; others showcased just one or two. A View To A Kill found them following the lyrics quite literally and dancing into the fire, which was projected on the transparent screen. (Only a few of the numbers used the screen.) For Your Eyes Only incorporated underwatery projections and Moonraker was a solo ballet in front of a huge full moon. Goldeneye switched spy allegiances to Alias, with each of the girls sporting Sidney Bristow-ish wigs and performing sexy dances involving chairs. Goldfinger started off strong featuring a girl in a skin-tight gold bodysuit (I guess they bought into the rumors of Shirley Eaton’s skin suffocation and chose to avoid gold paint–or maybe they just needed a quick change!) but got kind of weird at the end with the Golden Girl basically doing the Egyptian and the Robot. (Not a high point in the choreography.) 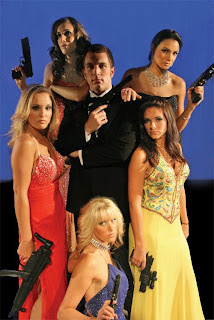 Tomorrow Never Dies took a fresh approach, with the dancer herself performing the song. (She did a good job, and I wish I could give her due credit, but the program doesn’t make it clear which dancer was singing.) Lyrically, this makes sense, with the mournful opening, "Darling, I’m killed/I’m in a puddle on the floor/waiting for you to return." She’s joined by a Bond (Ryan Joseph), who she pines after throughout the number but whose eye is always easily turned by the other dancers. It was really a very good interpretation of the song. Bond appears Casino Royale poster-style, in a tux with his tie undone, but the tux has a wing-tip collar, which isn’t very Bondian. (I’m guessing Clint’s Tux, who earns the costume credit, doesn’t stock Brioni.) He’s also wearing a vest, which looks kind of lame when he strips off his coat midway through. (Don’t worry; 007 doesn’t get any nakeder than that!)

Act One concludes with a very nice arrangement of On Her Majesty’s Secret Service and 007 (both instrumentals), followed by You Know My Name. Coon does a good job standing in for Chris Cornell on the blustery vocals, with Hyrkes contributing the "Spin of the wheel!" echo in a nice touch. This number included the least Bondian costumes, mostly of the leather variety. (I don’t think we’ve ever seen a Bond Girl in buttless chaps!) It also, bizarrely, featured a poncho. (Perhaps an obscure reference to Moore’s silly undercover get-up in Moonraker? Newell proves himself a big enough Bond fan that I’m willing to give him the benefit of the doubt!) Despite the strange costumes (and don’t get me wrong–I’m not complaining about beautiful women in leather!), You Know My Name was truly a show-stopping routine, with the girls firing large guns (shooting blanks, of course) at the audience and then at a Bond silhouette target (ala the opening gun barrel). The projections (behind them, this time) were so well timed that their shots even left "bullet holes"!)

After more banter from the hosts and an intermission, Act Two upped the ante with more risque routines. You Only Live Twice (with Dr. Shatterhand’s pagoda castle AND Blofeld’s volcano forming the background in silhouette!) saw the dancer finally shrug out of her skimpy kimono, ending up topless, but facing away from the audience in classic burlesque style, and faithfully preserving the "tease" in "striptease." Similarly, the dancer performing the Vegas showgirl-inspired Diamond Are Forever also lost her top, only to playfully cover up with giant white feathers. Exiting the stage, she tossed the feathers aside... as she wrapped herself up in the curtain.

The same girl who sang Tomorrow Never Dies also performed The World Is Not Enough on stage, in the same costume, seemingly inspired by the belly dancers in From Russia With Love. Again, she did a great job. From Russia With Love itself featured the only musical gender reversal, with Hyrkes impressively handling the vocals in a manner similar to Natacha Atlas’s cover version on Shaken And Stirred. The dancer stripped out of a Russian army uniform and large fur hat in an especially sultry routine. Hosts Makaryk and Coutu returned for another kind of gender reversal, doing a comedy striptease of their own to an instrumental version of Thunderball. They actually got more naked than any of the girls ever did, but fortunately managed to keep things JUST the right side of the fine line between "comical" and "disturbing." Again, it was a scene that would have been right at home in an old time burlesque show.

Nobody Does It Better rounded out the second act, and Live And Let Die served as a grand finale as big as those of the films themselves. Bond returned (with tie this time) and took on a succession of spear-toting girls in costumes inspired by Octopussy’s circus girls. This was very much an "action dance," with one woman wielding a whip against 007. Another stripped down to a Honey Rider bikini to audience applause, only to fight Bond with a knife as the columns that formed the set for this number began collapsing all around them in explosions as smoke filled the stage!
"The Burlesque of Bond" is a loving tribute to Bond movies and a successful, original staging of what could be unfilmed opening title sequences. It’s also an entertaining burlesque show, sexy and risque, but completely tasteful, with healthy doses of cheesy humor. Los Angeles area Bond fans shouldn’t miss it. It’s worth braving the 5 at rush hour for. The bad news, unfortunately, is that it closes tomorrow (July 14) in its current incarnation; the good news is that the Maverick Theater hopes to keep it running on a weekly basis in a slightly truncated, hour-long format, with a few different numbers, Saturday nights at 10. Be sure to check their website for updates.
Posted by Tanner at 12:31 AM

The Runaways movie got screwed out of a Golden Globe nomination because of this.watch Burlesque Online A movie with music that came out in Decemeber. Big suprise it gets nominated for best musical. They'll nominated anything music or comedy related as long as it comes out late in the year.