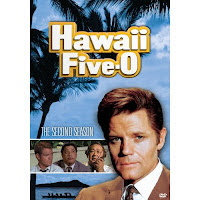 The Rhinemann Exchange
Universal stokes the Ludlum fires in anticipation of Friday's Bourne Ultimatum by releasing this 1977 TV mini-series adaptation of his novel. The Rhinemann Exchange stars Lauren Hutton, John Huston and Stephen Collins.
Hawaii Five-0: The Second Season
The second season of TV's longest-running cop show offers up more espionage entanglements than the first one.* Dr. No's Jack Lord returns as Steve McGarrett to take on terrorists, assassins, sabateurs and spies, as well as the usual island riff-raff like con-men, murderers and jewel thieves.
McGarrett’s second encounter with his arch-nemesis Wo Fat, Red Chinese spymaster in charge of the Pacific Theater, is much more satisfying than his first. In Season 2's 40 Feet High and It Kills, the sense of history between the two men makes Wo Fat a better adversary this time around. When Fat realizes it has to be McGarrett who’s messing up his plan, he exclaims in front of his prisoner that he should have killed McGarrett when he had the chance (in Season 1). This piques the hostage’s interest, causing him to declare, "I’m starting to like this McGarrett!" So was I! It’s a definite asset if your hero can dominate even a scene he’s not in, as Jack Lord did this one with the mere, far-off threat of his potency.
It also helps that 40 High and It Kills boasts a much more compelling story than Cocoon’s tired Ipcress File retread. Wo Fat works quite a scheme here, every bit as unnecessarily complicated as any super-villain’s should be! In an exciting opening sequence, his men take over a weather observatory and issue a fake tsunami warning. This provokes Five-O to initiate evacuation plans, and in doing so gets the world’s top geneticists off the secure estate (the same one that later played Robin Masters’ estate on Magnum, P.I.!) where they’ve been having a conference and into an unprotected car where they can be easily hijacked.
Director Michael O'Herlihy incorporates some atypically stylish visuals for an American show of this era, including a neat repeated shot through a glass map as McGarrett draws on it from the other side, plotting his moves. Not only does the shot look cool, but it builds the hero up as more than just a man of action, but a master strategist. The whole episode plays out as a chess game between titans, with McGarrett and Wo Fat each moving their pawns (Five-O and Chinese henchmen, respectively) around the island.
The episode is also boosted by some especially fine guest performances, including Khigh Dhiegh as Wo Fat, Will Geer as the brilliant but eccentric kidnapped geneticist and the luminous Sabrina Scharf as his beautiful daughter who holds the key to his release if only she’ll cooperate with Five-O. The always-good musical score also especially stands out in this one, with some memorable variations on the classic main theme. One final tidbit worth noting is the weird coincidence of one of the geneticists (surely a rare profession in 1969) sharing a name with the best-selling author who would write the world’s most popular genetic thriller over two decades later: Professor Michael Crichton. How strange!

I'll post a full review of the season (from the spy fan's point of view) soon. Viewers should beware, however, that there is an episode omitted from this release. The following disclaimer appears in small writing on the back of the box: "The Second Season Episode 'Bored, She Hung Herself' aired only once and is not included in this set. Some episodes may be edited from their original network versions." To my mind, DVD sets are the opportunity to INCLUDE episodes that only aired once! It's weird: originally, I didn't even have ambitions to watch every episode of this set, let alone seek out one that wasn't part of it, but now, because Paramount is saying I CAN'T see it, I'm determined to track down a copy of Bored, She Hung Herself! I want to know what's SO bad that not only could it be re-aired in 1969, but it can't even be issued on DVD nearly forty years later!
*At least, that's what I'm assured by Five-0 mega-fan Brian Flagg on The Avengers forums. Thanks, Brian!
Posted by Tanner at 12:34 AM