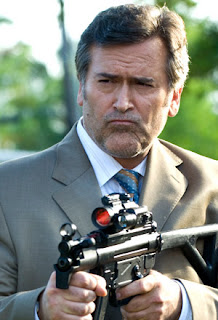 Deadline has lots of new details on the Burn Notice spinoff movie focusing on Bruce Campbell's character, Sam Axe, that was first announced last summer at Comic-Con.  Most importantly, the two-hour film (which was announced rather informally during the Burn Notice panel), has an official greenlight.  It begins filming in January, on location in Bogota, Columbia, Burn Notice creator Matt Nix will write the script, and Michael Westen himself, Jeffrey Donovan, will direct.  (Donovan made his directorial debut on this season's "Made Man" episode, which focused on Campbell's character.)  The movie will premiere on USA sometime in the spring, presumably bridging what's likely to be a longer-than-normal gap between seasons, since the second part of Season 4 started earlier than usual, in November instead of January.
The trade blog also reveals that this prequel spinoff is set in late 2005 and focuses on Sam's final mission as a Navy SEAL. "It begins after a faction of Colombian rebels makes trouble for the locally stationed military platoon, with Lieutenant Commander Axe (Campbell) being sent down to investigate. As the mission unfolds, Sam begins to uncover the dark secrets of the area, learning the truth about sacrifice, deception, and ultimately what’s worth fighting for."  I'm kind of surprised that it's just 2005, because I got the idea that Sam was supposed to have been lounging around Miami for more than just a couple of years when Burn Notice began in 2007.  If it's only supposed to be a few years earlier, though, I guess Campbell doesn't have to slim down as much!  He's already been shedding weight for this prequel, though, as proven by Sam's sudden preference for tight T-shirts over baggy Hawaiians in recent episodes of the show.

Now, I'm a huge Bruce Campbell fan.  When I first heard about Burn Notice, the angle I took in my initial post on the subject was "New Bruce Campbell Spy Series."  Like millions of movie geeks and horror fans, I love him.  But apparently USA executives didn't really realize that until Comic-Con in 2009.  USA's president of original programming Jeff Wachtel told Deadline, "We saw Bruce Campbell as the Bruce Springsteen of Comic Con [at that initial '09 panel]. We saw the spectacular explosive fan reaction and realized that, in Bruce, we had not only a great actor but also a pop culture icon." And that's where the idea came from to do this Bruce-centric spinoff film.  I'm glad they finally caught on!  It's also cool to see the power of fan response at Comic-Con directly affecting programming like that.  Is there a possibility of more Sam movies in the future, or even a whole spinoff series?  "It is a one-off," says Wachtel... for now. "We’ll see how it goes."

I certainly wouldn't want to see Bruce leave Burn Notice, but a spinoff series after the show ends would be good, as would more movies.  I suppose it would also be cool to see future prequel films about Fiona and Michael, but I'm most into the Sam idea.  It's too bad they're starting off with his last mission, since that would mean that any further prequels would have to take place even further in the past... and Bruce Campbell doesn't age like Benjamin Button.

For more Bruce Campbell spyishness, check out Jack of All Trades (on which he played a Revolutionary War-era American spy in the Caribbean) and the "Stagecoach" episode of The Adventures of Brisco County, Jr. (which is one of my favorite TV shows of all time, and what made me a Bruce Campbell fan to begin with).
Posted by Tanner at 4:21 PM