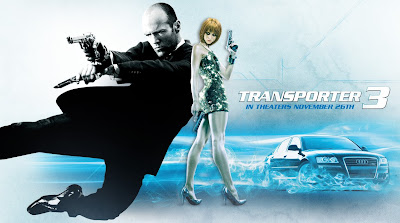 We first heard about the prospect of a TV series based on EuropaCorp's neo-Eurospy Transporter films last year, then quiet.  I had kind of assumed that meant the project was dead, but it turns out that's not the case. Deadline reports that not only is the series very much alive, but it's already got a commitment from an American network and is due to start filming early next year.  According to the trade blog, EuropaCorp won’t reveal who the US partner is, but chairman Pierre-Ange Le Pogam promises "it's a big one.”  (My guess would be Spike or FX, which both play the Transporter movies and both seem like good fits for the franchise.  But we'll have to wait and see.)  The first 12-episode season is budgeted at $48 million. Filming is slated to commence "early next year," with the first episodes expected in November.  One EuropaCorp franchise is already a successful TV series in America: Nikita, which airs on The CW (and has improved significantly since its pilot), and already has a full-season order.  The company is aggressively trying to expand further into television, with not only the Transporter series on the horizon, but also tentative plans for a show based on its Liam Neeson neo-Eurospy hit Taken.  That won't move forward until after Taken 2 films in the spring, however, according to Le Pogam.  (Neeson is committed, but they're still trying to lock down a director.)

I love the Transporter films, and while I would much rather see a fourth cinematic entry starring the great Jason Statham, a TV series appeals to me as well–especially since it will be shot in Europe.  I loved Taken, too, but I'm more hesitant about its potential as a TV series.  The premise of an ex-spy's daughter being kidnapped, prompting him to go on a merciless tear of righteous ass-kicking until he finds her, would not really lend itself to a series.  (Or even really a sequel, so I'll be curious to see how they pull that one off.)  The character of Bryan Mills (Neeson) probably has more to do with the film's success than its premise (and certainly has the potential to fuel a film sequel with a different set-up), but that's so tied in with Neeson's performance that it's difficult to imagine Mills making much impact on television, where he would probably come off as a Jack Bauer clone.  Still, I'll give any potential spy series a chance, so we'll see where this leads.  In the mean time, I'm sure looking forward to Taken 2.

Just to clarify, it is not expected that either TV show will star the actor from its respective film series.  So who could possibly fill the shoes of Statham and Neeson?  I don't really have any ideas about Neeson.  Presumably on TV, the character would be sort of Equalizer-like: a skilled former operative–not young–who uses his spy skills to help people.  I can't think of anyone off the top of my head in that age range with Neeson's requisite gravitas.  I do have an idea for The Transporter, though: I think Rome's Kevin McKidd (currently seen on Grey's Anatomy) could be good.  Come to think of it, his co-star Ray Stevenson wouldn't be a bad choice either...
Posted by Tanner at 7:51 PM