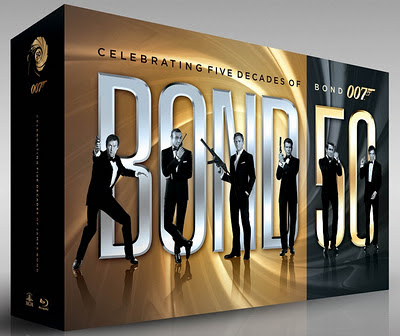 Finally! At long last, the remaining nine James Bond movies will see release in high-definition on the Blu-ray format. Several waves came out in 2008 and 2009, but since then, we've seen nothing. Until now. Today at the Consumer Electronics Show, Fox and MGM announced that all 22 official 007 movies to date (that excludes rogue productions Never Say Never Again and Casino Royale '67, both of which are already available individually on Blu-ray from MGM) will be released on Blu-ray together in the massive "collectible box-set" Bond 50. It's the first time all the movies have been released together in the format, and marks the Blu-ray debut for You Only Live Twice, On Her Majesty's Secret Service, Diamonds Are Forever, The Spy Who Loved Me, Octopussy, A View to a Kill, The Living Daylights, GoldenEye and Tomorrow Never Dies. In addition to the films, Bond 50 will boast "more than 130 hours of bonus features including some new and exclusive content." I'm really curious to see what that new and exclusive content is! All of the Blu-rays released so far have included the exact same special features as the DVD Special Editions, so does this new content mean that the missing titles will get new, additional extras? Or will there be a bonus disc (or discs)? I'm betting on the latter. SRP for this huge set (which marks the first time in recent memory that all of the films have been packaged together in any format in the U.S.) is a whopping $299.99, but it can already be pre-ordered on Amazon for substantially less: just $199.99. And that's not bad at all, as it works out to less than $10 a disc.

Of course the bad news here is that most fans likely already own the existing Blu-ray titles, and since no individual releases have been announced, they may feel compelled to shell out all over again for this complete set just to own the ones they don't already have. That's clearly the strategy here. And, personally, I have to admit it doesn't really bother me. Historically I've always upgraded to the latest release of Bond movies anyway, going all the way back to the days of VHS, so I'd probably buy this set even if the only upgrade was a new bonus disc. (I'm a sucker for new editions of James Bond and Evil Dead.) And for those who aren't completists like me (though I suspect a lot of readers are), I have no doubt that the missing titles will be released on their own sometime down the road.

The press release ends with a quote from Michael G. Wilson, promising that "We have a whole program of exciting activities planned for our 50th anniversary year, beginning with today’s announcement." This is an exciting beginning to 007's Golden Anniversary in the cinema. I can't wait to see the rest of the program EON's got planned! In the meantime, here's a trailer for the Blu-ray collection:

Yes, it should be interesting to see what else they have planned.

As for the Blurays, I have all the individual volumes so far released here in England and I shall wait until the remaining ones are released individually. Unless there is a substantial amount of new (and worthwhile) extra material for the titles that I already have, they can whistle for my cash for the boxset!

I loved that 007 music used for the "Casino Royale" trailer. Thomas Newman, are you listening?

The BluRay collection is up for pre-order at amazon.co.uk for about £90. Despite what I've said above, that seems like a bargain to me and therefore I've preordered. So much for principles :-)

Personally I'm Pissed off about this set. I had waited off buying the bonds on DVD for the longest time so when the Blu-Rays first came out I started replacing my VHS copies right away. Now I get half way through all of them on Blu-Ray and I hear this is coming out? NOT COOL MGM like I don't mind seeing this but what about all the people that had already bought the bonds on blu-ray when they where first released? I HIGHLY doubt that even the die hard bonds who bought the first few blu-rays will be willing to shell out $200 or what ever for this new set just to get 13 films they may already own and only 11 they don't I really hope MGM does like what they did with the last box sets and releases the remaining bonds as single "Steel Book" Blu-Rays.

It IS annoying having to wait, but I bet anything that within a year of this set, MGM will issue the remaining Blu-ray titles individually. However, I wouldn't necessarily count on them maintaining uniform packaging with the original releases...

Still, if you're in that situation, I recommend waiting.