The Avengers' Black Widow Gets Her Own Comic--Inspired by the REAL Avengers' Emma Peel! 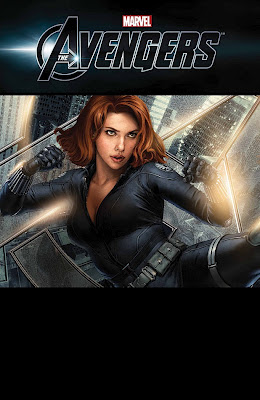 Regular readers will know that I'm a big fan of the spies in the Marvel Comics Universe, including Nick Fury and the Black Widow. I'm slightly less of a fan of the spies in the Marvel movie universe, but I'm still excited to see Samuel L. Jackson's Fury and Scarlett Johannson's Widow (both veterans of Iron Man 2, as well as other Marvel movies in Jackson's case), along with their fellow S.H.I.E.L.D. agents Coulson (an original movie character played by Clark Gregg; I still wish they'd just named him Jasper Sitwell, after the comics character) and Hawkeye (played by utility spy franchise fill-in Jeremy Renner, who made his debut as the character in a cameo in last year's Thor) in this summer's Joss Whedon-directed superhero tentpole The Avengers. (I'm not a fan, however, of Marvel's use of the title The Avengers, which to me belongs to John Steed and his various cohorts, who pre-date the Stan Lee comic by two years.) Now, according to Newsarama, the worlds of film and comic book will temporarily merge in a new comics miniseries with a title almost as awkward as my parenthetical-laden mega-sentence above: Marvel's The Avengers: Black Widow Strikes. The three-issue series by Fred Van Lente and various artists will reveal the movie Black Widow's espionage exploits that happened between Iron Man 2 and The Avengers. Coulson and the movie version of Nick Fury (who's based on the Ultimate Universe version of the character, who was actually modelled on Jackson long before he ever signed on to play the role) will also make appearances. But the reason I'm really excited about this series is because Van Lente name-checks the actress who played my very favorite catsuited female superspy, Emma Peel from the real Avengers of Sixties TV! "I am a huge espionage nut," the writer tells Newsarama. "My obsession with kick-ass spy females dates back to my sixth grade crush on Diana Rigg." An Emma Peel obsession is definitely the right background to writing a good Black Widow adventure.

Oddly, this comic will first be serialized in the Russian edition of Maxim, and will consequently be a bit more risque than film tie-in comics tend to be. The Marvel miniseries version then hits stores this May, the same month that The Avengers opens on screens across the country.

For fans interested in getting to know the real Black Widow of Marvel Comics, there are three great hardcover collections that make an excellent introduction: Sting of the Widow, Black Widow: Web of Intrigue (featuring a terrific Paul Gulacy-illustrated story that "guest stars" Michael Caine) and Black Widow: The Itsy-Bitsy Spider (which contains stories written by Queen & Country's Greg Rucka).
Posted by Tanner at 1:17 PM