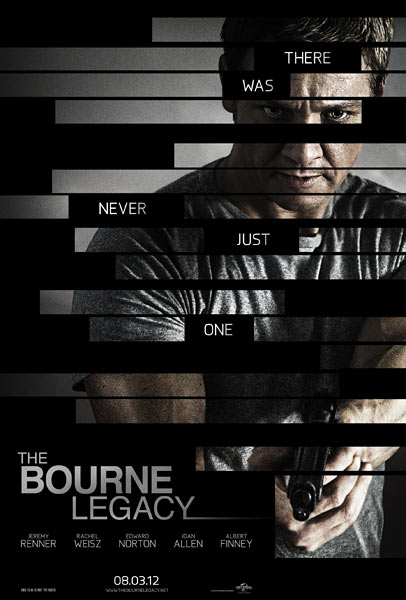 Today, Universal afforded spy fans our first glimpse at Jeremy Renner in action as Matt Damon's Bourne replacement (though not playing the same character). And, not surprisingly, really... it looks good! Even without Rachel Weisz or any of the Phillipines footage we know they shot. So it's a very solid teaser... building slowly, revealing the new actor (you were expecting someone else?) and finally giving us a taste of some awesome spy action in a wintry setting without giving away much at all about the plot itself or spoiling too many of the film's highlights. One thing it does reveal, however, is David Straithairn. I don't recall previously reading that he would be reprising his Bourne Ultimatum role in this. Tony Gilroy's The Bourne Legacy (which is not based on any Robert Ludlum novel or Eric Van Lustbader's continuation novel of that name) opens on August 3, and I can't wait!

Watch the trailer in HD on the Apple site.

I was skeptical but I just love the look of this thing. Another writer has already noticed the Saul Bass influence with the 60's style optics which intriguingly draws us into the battered face of Jeremy Renner. The ominous music, the downbeat, chilly scenes of winter....alright, I'm there!

I, too, was skeptical, both due to the absence of Damon/Greengrass and because the fourth time is seldom the charm. That said, the film looks great, and what a cast! I'm really curious to see what the scenes in the Philippines will be like. It's a great setting for an action movie. Plus, the Threadstone fighting curriculum is based on Filipino martial arts, which is why their agents are so tough. Of course, being a Kali instructor, I may be biased!

I didn't know about the Filipino martial arts influence. That certainly adds another impressive thread to the Manila location! I imagine we're in for some very cool action there.

I was never skeptical about Tony Gilroy, who I think has proven himself as a director already, but I was about Renner. But he pretty much assuaged any fears I had with his performance in Mission: Impossible - Ghost Protocol. And he looks great here. The only misgiving I still have is the whole "spin-off" angle. I would have greatly preferred it if they had simply recast "Jason Bourne" (or David Webb or whatever you want to call him) and had Renner play the same character as Damon, just as they've done with Bond time and again. But the trailer looks pretty awesome, and at the end of the day that's all that really matters!

If you'll pardon a bit of Kali geekery… Matt Damon trained in Western boxing and Kali to play Jason Bourne. His trainer and fight choreographer was Jeff Imada, an instructor at the legendary Inosanto Academy of Martial Arts. According to the first film's director, Doug Liman, "we arranged for demonstrations of different martial arts and Kali really inspired us. It is ridiculously efficient…. And we thought - that's Jason Bourne, that's how he'll do everything in this movie. He'll figure out the simplest, least energetic, most efficent way to get something done."

Another recent example of Filipino martial arts in film was "Hanna." Eric Bana and Saoirse Ronan are shown practicing 6-step sinawali double-stick drills at the beginning of the movie, and the fight sequences were all based on Kali. Ronan trained extensively at the aforementioned Inosanto Academy to get ready for the role.

From what I could tell from the clip from "The Bourne Legacy," Jeremy Renner has definitely been getting some good Kali training himself!

Back to the movie, I'm actually quite curious to see how the whole spin-off thing will be handled. Gilroy is a smart guy, and I think there is potential for something really interesting.

I think Tony Gilroy knows that he has got something to prove! Trailer looks very good!
Hope they keep the music in style.

BTW: Youtube is full of Philippines behind the scenes footage of the Bourne Legacy. Must be a big event over there...