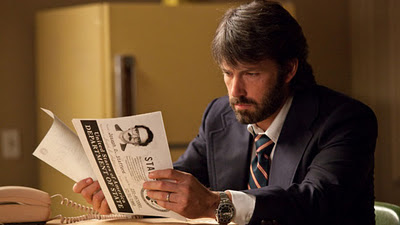 A little over a month ago, The Hollywood Reporter unveiled the first photograph of Ben Affleck playing self-described CIA "Master of Disguise" Antonion Mendez in his fact-based tale of a daring hostage rescue in Iran, Argo. If his book

is to be believed, Mendez was something of a real-life equivalent of Mission: Impossible's Jim Phelps. Indeed, the rescue plot he came up with, which involved agents posing as a film crew shooting a fake sci-fi movie, sounds right out of that TV show. Further solidifying the connection, today the Huffington Post revealed another still from the movie... and this shot of Affleck briefing his team in a living room instantly makes me think of the obligatory team briefing in Jim's apartment that begins every episode of Mission: Impossible. Perhaps the connections are entirely unintentional, but this is shaping to look up like a really fun spy movie either way. 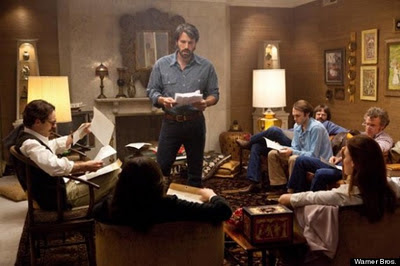 I was already interested in Argo, but having Jack Kirby as a character in it was what made it a must-see. Bizarre!

I didn't realize he was a character! How cool!