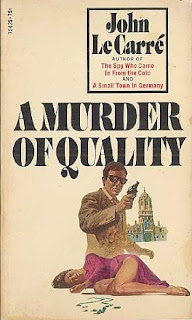 Part 5 of an ongoing series, "The Smiley Files," examining the career of George Smiley in literature and film. Read my introduction to Smiley here.

John le Carré’s second novel, A Murder of Quality, features George Smiley, but it doesn’t feature any spying. While Smiley finds himself either pushed out of the Circus (le Carré’s sobriquet for British Intelligence) or resigning from it in disgust in nearly every novel he appears in, A Murder of Quality is his only adventure that occurs entirely outside of the Circus, and doesn’t feature any of its staff—not even stalwart Peter Guillam. Instead, Smiley is called upon by an old friend and wartime intelligence colleague, Aisla Brimley, to investigate the murder of one Stella Rode, a junior teacher’s wife at an exalted English public school, the fictional Carne. While Smiley may be somewhat out of his element here, the author is decidedly not out of his. Because while a detective story isn’t necessarily a spy story, nearly all of le Carré’s spy stories are detective stories.

In Call for the Dead (review here), Smiley is an investigator attempting to solve a murder. The circumstances in which it happened and the people involved put that particular murder in the realm of Smiley’s department (though he resigns from it early on and acts as a private citizen for most of the novel) rather than the police, but his methodical investigation is very much in the tradition of Sherlock Holmes’ or Hercule Poirot’s investigations. And le Carré’s careful plotting very much follows the classical mystery structure, revealing one clue at a time, along with plenty of red herrings and misdirection. Later Smiley novels follow the same formula. Smiley’s People is another out-and-out murder investigation. In that one, Smiley’s called out of retirement (yet again) to probe the murder of an agent he used to run, a trail which will eventually lead him to his old nemesis, Karla. Tinker, Tailor, Soldier, Spy is a similarly structured detective story (again beginning with Smiley being summoned out of retirement), only the mystery is uncovering the identity of a mole rather than a killer. Still, the process is the same: a meticulous search for clues and a methodical study of the facts at hand. Even The Honourable Schoolboy has a mystery at its core—the mystery of Karla’s Hong Kong Gold Seam. (I'm glad le Carré didn't call it that, thought!) A Murder of Quality, therefore, is hardly treading unique narrative territory for the author, although the public school setting is unique for the character. 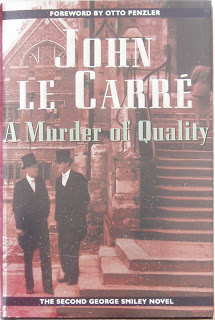 As Otto Penzler points out in his introduction to the Walker edition, Smiley is a natural detective, in the same league as Holmes and Poirot and all of their ilk. It somehow makes sense to see him tackle the same sort of case those titans would attack.

Smiley approaches detecting the same as he does spying. “It had been one of Smiley’s cardinal principles in research,” le Carré writes, “whether among the incunabula of an obscure poet or the laboriously gathered fragments of intelligence, not to proceed beyond the evidence. A fact, once logically arrived at, should not be extended beyond its natural significance. Accordingly he did not speculate with the remarkable discovery he had made, but turned his mind to the most obscure problem of all: motive for murder.” Smiley’s investigation is a textbook approach that would do his literary forebears proud, and once again le Carré proves a master of the form, doling out clues with enough regularity to make the problem solvable for the reader, but at the same time obscuring them with enough misdirection to make arriving at a conclusion difficult.

On the eve of her brutal murder, Mrs. Stella Rode wrote to Brimley’s agony column in a small nonconformist newspaper and expressed that she suspected her husband was trying to kill her. Thus her husband, Stanley Rode, seems the prime suspect when Smiley arrives on the scene, letter in hand for the local police. (As in Call for the Dead, he works hand-in-hand with an official detective.) However, despite the letter, Smiley quickly discovers a heap of evidence suggesting that Rode couldn't have done it. A whole assortment of suspects present themselves as the spy-cum-detective moves about in the halls of academia and the odd, fiercely class-conscious social circles of Carne. 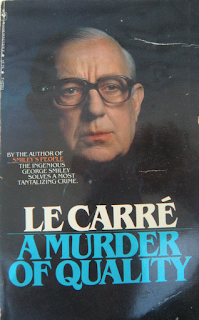 Despite crafting a perfect mystery story, however (complete with a final false solution every bit as surprising and satisfying as the one in Tinker, Tailor), le Carré is less concerned about his genre than he is about his characters and themes. As with many of his spy novels, the thriller conventions here are merely a clotheshorse on which to hang a hilariously vicious condemnation of the British class system as cultivated in Etonian institutions—and with which to explore a handful of memorable, deeply flawed and deeply human characters.

The best dialogue comes from the characters for whom the author clearly feels the most contempt. Witness, for example, the venomous, socially-obsessed don’s wife Shane Hecht’s remembrances of the deceased: “Stella Rode was such a nice person, I always thought . . . and so unusual. She did such clever things with the same dress. . . .” Later, “I went to tea with Stella once. Milk in first and Indian. So different.” It’s clear that for someone like Shane Hecht, “different” could never be a compliment.

Or, on the subject of funerals: “I hate funerals, don’t you? Black is so insanitary. I always remember King George V’s funeral. Lord Sawley was at Court in those days, and gave Charles two tickets. So kind. I always think it spoilt us for ordinary funerals in a way. Although I’m never quite sure about funerals, are you? I have a suspicion that they are largely a lowerclass recreation; cherry brandy and seed cake in the parlour. I think the tendency of people like ourselves is for a quiet funeral these days; no flowers, just a short obituary and a memorial service later.”

For Shane Hecht, the author tells us, people exist “to be found wanting in the minute tests of social behavior, to be ridiculed, cut off, and destroyed.” A woman who collects the shame of others, she’s got Smiley’s number, too. She corners him at a dinner party and makes it clear what she thinks of this outsider in her hallowed circle:


“The only Smiley I ever heard of married Lady Ann Sercombe at the end of the war. She left him soon afterwards, of course. A very curious match. I understand he was quite unsuitable. She was Lord Sawley’s cousin, you know. The Sawleys have been connected with Carne for four hundred years. The present heir is a pupil of Charles; we often dine at the Castle.” For a moment the noise in the room stopped. For a moment, no more, he could discern nothing but the steady gaze of Shane Hecht upon him, and knew she was waiting for an answer. And then she released him as if to say: “I could crush you, you see. But I won’t, I’ll let you live,” and she turned and walked away.

Yes, this is very much the same Smiley we know and love from the other books. In addition to being hopelessly devoted to an absent wife, he’s “toad-like,” and “short and plump, with heavy spectacles and thinning hair,” and “the very prototype of an unsuccessful middle-aged bachelor in a sedentary occupation” whose “natural diffidence in most practical matters was reflected in his clothes, which were costly and unsuitable, for he was clay in the hands of his tailor, who robbed him.” Yet he’s also capable, when he finally corners the killer, of the same sudden ruthlessness we later witness on occasion in the Karla Trilogy. That doesn’t mean, however, that he has a taste for such things. “He had come to the end of the chase, and was already sickened by the kill.”

One character succinctly sums up the discrepancy between Smiley’s looks and his intellect: “Looks like a frog, dresses like a bookie, and has a brain I’d give my eyes for.” It’s certainly possible that the author feels the same way about his character. He may ridicule him in his descriptions, but at the same time I suspect le Carré may want to be Smiley as much as Ian Fleming wanted to be James Bond. Fleming’s alter ego was a man of action who lived the adventures the author dreamt of during his deskbound war—a classic schoolboy fantasy; le Carré’s alter ego is a man of intellect, but perhaps more crucially, a man of staunch convictions that the author, belonging to another generation who never fought a noble war, simply cannot subscribe to. If Smiley is a clergyman, le Carré is the lapsed parishioner who envies his faith, but is himself incapable of such devotion. But the later books better illustrate Smiley’s convictions.

At a scant 152 pages, A Murder of Quality is a breezy read. It’s light-weight entertainment with a fun mystery and some biting social satire sure to have readers laughing aloud, but it’s certainly not essential le Carré. Die-hard fans of Smiley will enjoy seeing the familiar character in an unfamiliar setting and recognize recurring themes in the author’s work, but newcomers to the le Carré canon are encouraged to seek out his more substantial, far more essential work first—like Tinker, Tailor, Soldier, Spy, The Spy Who Came in from the Cold, or even Call for the Dead.