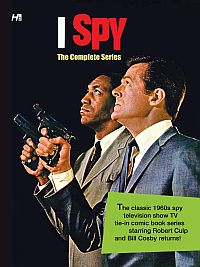 Spy Vibe points the way to some very exciting news for fans of Sixties spy television and comics: the long-awaited collection of Gold Key I Spy comics from Hermes Press is now officially on the publisher's schedule! Amazon lists the release date as June 19. The 256-page hardcover compendium I Spy: The Complete Series reprints all six issues of Gold Key's comic books based on the globetrotting Robert Culp/Bill Cosby TV series, as well as (per the publisher) "informative essays about the creative team behind the comic book and loads of never-before seen publicity photographs featuring stars Culp and Cosby." Paul S. Newman scripted the stories, and Al McWilliams and Mike Roy provided the art. SRP is $49.99, but you can pre-order this baby from Amazon for just $31.49 right now! Best of all, this book is hopefully just the tip of the iceberg for fans of Gold Key's TV-based Sixties spy comics. A Hermes representative told me at last year's Comic Con that the publisher hopes to follow their I Spy volume with subsequent collections featuring all the other Gold Key spy properties, including The Man From U.N.C.L.E. and The Girl From U.N.C.L.E., and I think the Dell ones as well, like Mission: Impossible. I can't wait!
Posted by Tanner at 11:58 PM

Great news! Sheldon Leonard would be pleased. Does an in-depth I Spy focused interview qith The Cos exist?