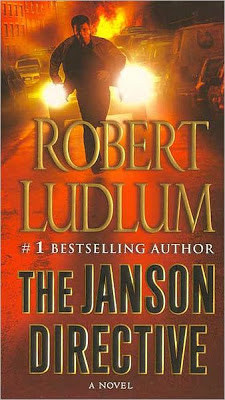 Is there a character called Janson? Yes.
Is there a directive? Hm. Not specifically. No, I can’t think of any directives issued by name.

It’s hard to say how much of The Janson Directive was actually written by Robert Ludlum, since it was published the year after he died, but the book certainly feels Ludlumy, so I’m personally guessing quite a bit of it. While novels kept appearing attributed to the late author for as many as five years past his death, those ones were written by ghost writers based on outlines or notes the master storyteller had supposedly left behind. This one was apparently (according to The Book Reporter) assembled from a nearly complete manuscript by the author’s long-time editor, Keith Kahla, and his literary agent, Henry Morrison. And they did a great job because, as I just wrote, The Janson Directive absolutely feels like a Ludlum novel. (The same cannot be said of all the ghostwritten efforts.) Which is to say, it’s thoroughly gripping and entertaining from cover to cover. It doesn’t rank too near the top of his pantheon, but it’s not at the bottom either.

Paul Janson is a former agent of the top secret American spy agency Consular Operations (ConsOps), the same fictional branch of the intelligence community that features in many of the author’s novels going back at least as far as The Matarese Circle (1979). That’s not the only sign of a shared universe here; there’s also a direct (if subtle) connection to the Bourne novels, carefully coded in such a way to only reveal itself to fans of the novels, not the films. That part actually seems like something that might have been the work of hands other than Ludlum’s, but even if that’s the case, it’s well handled and quite appropriate for this book. The Janson Directive hinges on a highly complex, long-term, deep-cover intelligence operation quite similar to the one Jason Bourne was involved in (making it appropriate that the two operations shared an architect), but the story this time is told from a very different point of view and the author takes the similar premise in a radically different direction.

In a passage shockingly similar to one he uses in The Sigma Protocol (review here), Ludlum writes in The Janson Directive about grief that “clichés came out at such moments—no less true for being so.” (Was he reusing a phrase he liked, or did the editors assembling the final manuscript decide to complete the work with some choice lifts from other novels?) So it could be said that Ludlum himself trades largely in clichés, but they are no less entertaining for being so. As in The Sigma Protocol, The Janson Directive revisits some of the author’s favorite themes and topics—and as in that novel, they feel fresher here than they have in years. After coasting through most of the Nineties in apparent decline, Ludlum seems to have been reinvigorated toward the end of his life and the results are some thoroughly entertaining spy novels. Some of the familiar themes and plotlines on display here include (of course) the man-on-the-run protagonist trying to clear his name (here of the disavowed professional school, as opposed to the rank amateur caught in way over his head), the vast global conspiracy through which an elite cabal controls world events (also of course), the sins of the father (so to speak), the globetrotting adventure (from a fictional Southeast Asian nation similar to Myanmar to Vietnam to Greece to London to Geneva to New York and beyond) and the resourceful methods of traveling between all those countries without a passport. In other words, everything you want in a thick Ludlum spy novel.

The pace is excellent. Whereas some of Ludlum’s lesser efforts seem to drag, The Janson Directive moves along through 768 pages at a whirlwind speed. The first 200 pages or so unfold quite differently than most Ludlum novels, as the hero assembles a Mission: Impossible-like team and embarks on a precise paramilitary covert extraction in a single location. Before long, however, things go terribly wrong, and amidst the fallout we’re left with the familiar lone hero on the run around the world.

The characters are also top-notch. At his worst, Ludlum could be accused of sometimes utilizing cookie-cutter Everyman heroes and childlike women who were little more than damsels in distress. At his best, his protagonists are compelling, multidimensional characters, and that’s what we have here. Paul Janson is a fairly complex character with a particularly compelling backstory that unfolds throughout flashbacks to Vietnam over the course of the book. The flashbacks reveal a parallel story that directly affects events in the present, and don’t bog down the narrative as lengthy flashbacks in this sort of novel sometimes can. The female lead, ConsOps sniper Jessica Kincaid, is also well-drawn. She’s of the New School of Ludlum Woman, like The Sigma Protocol’s Anna Navarro—a first-class skilled professional in her own right, fully capable of contributing to the adventure rather than impeding it, tagging along screaming to be saved.

If there’s a weakness in this novel, it would be the denouement. While the flashbacks pay off neatly, and the conspiracy itself is brilliantly revealed, some of its details fail to add up. The systematic murders of some of the requisite cabal’s members, for example (a standard Ludlum subplot) don’t make a whole lot of sense in the end. (Perhaps that can be chalked up to Ludlum dying before he could finish the book.) It wouldn’t be unfair to call the final showdown between the hero and villain a tad simplistic (a “Join me!” moment right out of Return of the Jedi), but personally I ate it up. It felt exactly right for this sort of fast-paced beach read. And that’s exactly what The Janson Directive is in the end: the sort of wildly entertaining beach read that passes the time thrillingly, but doesn’t leave a very lasting impression for too long after it’s finished. That’s just what I wanted out of it, and it delivered in spades.

Interestingly, The Janson Directive is the only non-Bourne solo Ludlum title to spawn a follow-up by another author—The Janson Command by Paul Garrison. (I’m not counting the cottage industry of the Covert One novels, a series Ludlum created specifically for other authors to write.) Perhaps this explains an odd coda in the original novel lifted directly out of The Holcroft Covenant for, apparently, the sole purpose of setting up a sequel. While that particular bit also feels like one that might not have originated with Ludlum, I wonder if it’s possible that the author always intended Paul Janson as another franchise hero? Besides its value as a literary property, I assume it’s in the estate’s interest to perpetuate a series in order to make the character more attractive to film studios. If that’s the case (and The Janson Directive has been optioned, by Universal), it seems kind of odd to do it with a hero in his fifties whose origin is so inexorably tied to Vietnam (which seems antithetical to what Hollywood is looking for; after all, they reinvented Bourne as a much younger man), but then again Liam Neeson has proven that there’s a market for older action heroes. I could easily picture The Janson Directive reinvigorating the career of another aging star and finding similar success to the Taken movies. Here's hoping!

Great blog, and a real service to spy novel fans.

How do you feel about The Aquitaine Progression? It happened to be the first Ludlum I picked up at a thrift store. I then abandoned it 100 pages on. Since I'm neck deep in good spy novels, I thought I'd ask if it's worthwhile, or if I should just jump to one of the others.

Thanks for stopping by, ArgosyJones! Good question. Unfortunately, I'm afraid I can't answer it. The Aquitaine Progression is one of the Ludlums I haven't read (along with The Icarus Agenda and a lot of the 90s stuff). I've been mostly re-reading/listening to ones that I really liked in middle school so far, but soon I'll get into some more of the ones I never read before. I'll definitely be giving Aquitaine a try at some point. But in the meantime I'd recommend starting with The Bourne Identity or The Parsifal Mosaic or The Chancellor Manuscript.

By way of thanks, I'll Post this search. First result is interesting. Probably soon to be gone, as it's justification paragraph is weak, legally.

I just finished the novel today, and it differs substantially from the film, probably both for production cost reasons, and for brevity.

Interesting! Well, since the movie's currently out of print in America and YouTube (so far, anyway) seems OK with the copyright, I have no problem with directing people to watch The Ipress File on YouTube if that's the only way they can see it... It is, after all, one of the all-time great spy movies. (One day I'll get around to reviewing it in the My Favorite Spy Movies series. For now, you'll have to make do with my review of its second follow-up, Billion Dollar Brain.) Yes, the novel does indeed differ substantially from the movie--about as much as Dr. No did from its source material. In both cases, I think it was due primarily to cost and what the producers felt they could actually, convincingly portray on screen. I think it work just fine keeping the action in The Ipcress File in the UK in the film, but the book, of course, is well worth reading! (As is any Deighton, though I contend that his masterpiece is the Bernard Samson cycle, beginning with Berlin Game.) There was a UK radio adaptation a few years ago that was much more faithful to the book, and that bears seeking out. I don't think it's been released officially, but I'm sure it's out there somewhere.