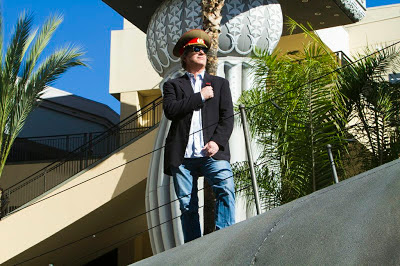 Earlier this week, FX promoted their new spy series The Americans in a big way in Los Angeles. The Americans follows a married couple, Phillip and Elizabeth Jennings (Matthew Rhys and Keri Russell) who are really Russian KGB agents spying on the United States at the dawn of the Reagan era. Therefore, to promote it, a full-size Soviet submarine "surfaced" in the middle of the courtyard at the busy Hollywood and Highland shopping mall, manned by a full crew of Russian sailors who later marched around the complex as a Russian helicopter flew overhead. ("I think that explains how the Soviet Union lost the Cold War," quipped series executive producer Graham Yost. "Their submarine surfaced in a shopping mall!") It was a pretty impressive spectacle—especially considering FX's publicity people got the sub fully constructed and then fully removed in the course of a single day. 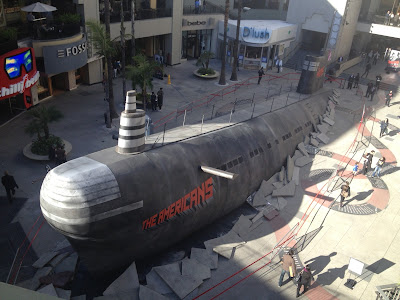 The submarine was just the public spectacle, however. More privately, Graham Yost was on hand to talk to press at a Russian-themed luncheon. I was lucky enough to attend, and had the opportunity to grill Yost on his own favorite spy shows and literature as part of a round table. First, however, Yost made sure to talk up the creator of The Americans, Joe Weisberg. According to Yost, he first worked with Weisberg on a CIA pilot called The Station which didn't go to series. (I'm not sure if this is the same Station I was so excited for during the 2009 pilot season, or a different spy show of the same title that also didn't get picked up.) At any rate, Yost loved collaborating with Weisberg, and knew he wanted to work together again. They briefly teamed up on the first season of Falling Skies, but it took a big news story to set them on their path towards The Americans.

After the Anna Chapman Russian spy ring was busted in the summer of 2010, every writer in Hollywood was trying to figure out how to capitalize on it. Yost knew that Weisberg was the guy to write that story, since Weisberg had himself been a CIA officer prior to becoming a writer. In fact, Yost thinks the Agency may have played a role in Weisberg's post-spook career. During one of their routine polygraph tests, a Langley staffer asked him if he only wanted to be in the CIA so that he could one day write about it. The way Yost tells it, that hadn't really occurred to Weisberg until he was asked that question! The upshot, however, is that everything Weisberg writes now has to be vetted by the CIA. (Redacted sentences were turned into a good gimmick in his debut spy novel, An Ordinary Spy.) That means, of course, that on some level the CIA has endorsed The Americans! (It's not clear, however, whether episodes not penned by Weisberg must also be submitted because of his producing role.) Anyway, Weisberg did indeed crack the Russian spy plot, with a little help from a studio executive who had the brilliant idea of setting the story in 1981. "Make it a period show," summarizes Yost. "The last great gasp of the Cold War. Reagan's just been elected; he's calling the Soviet Union 'the Evil Empire.' And the stakes just ratcheted up. The tension, the stakes, was the highest it had been in the Cold War since the Cuban Missile Crisis." 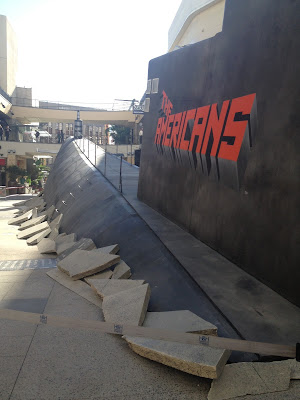 Beyond the period setting, the next key to success was focusing on a marriage. "It's not just a show about KGB spies in Washington in 1981," Yost explained. "It's also a story about a marriage." The Soviet agents have been married for 15 years because they were assigned to do so, but only as the series opens are they just beginning to fall in love. Both the removed time period and the relationship/family aspect make it easier for audiences to relate to Russian agents on The Americans. But they shouldn't completely forget which side these characters are on. "We want the audience to be rooting for Phillip and Elizabeth and then halfway through each episode say, 'Wait a minute! We're rooting for the KGB?!'"

Yost himself may not have been a CIA agent, but he's no stranger to spies, either. In the 1980s (while Phillip and Elizabeth were stealing our nation's secrets), Yost penned several non-fiction books about spying. One title, about cutting-edge espionage technology circa 1985, was a favorite of mine as a kid. I had Spy-Tech

(part of the young adult-friendly "Facts on File" series) on near permanent loan from the local Waterford Library until my parents eventually bought me a copy of my own. I told Yost that I'd grown up reading that book, along with his volumes on the KGB and the CIA in the World Espionage series, and asked if he'd been looking for a spy story to tell ever since he wrote those guides. 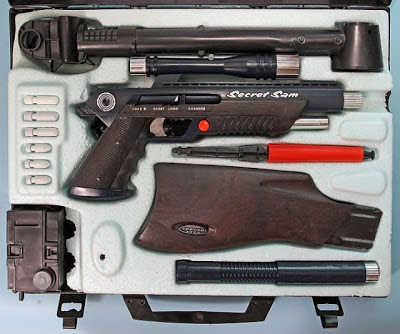 "You know my secret!" he said. "I grew up on James Bond films, The Man From U.N.C.L.E., reading other spy-related books, reading James Bond books as well as watching the movies. There was a toy in the Sixties called Secret Sam, and it had a gun in a briefcase and there was a little button on the outside so you could shoot the gun from the outside and a little plastic bullet would come out. And I would set the gun up in my room on a piece of string and my mother would come in and I'd shoot her in the back! (But she bought me the toy.) At any rate, as a start of production gift, Richard Deutch, my assistant, tracked down two of these on Ebay and got them for [fellow executive producers] Joe [Weisberg] and Joel [Fields]. And now I need to get one for myself. So, yes, to answer your question really long-windedly, I love the spy genre. I remember being a teenager and watching Tinker, Tailor, Soldier, Spy from the BBC, which John Irvin directed, and just being really riveted. And that started me off on John le Carré books, and yeah, I read as much spy stuff as I can."

Another journalist asked prudently if another British spy show, Sleepers, had been an influence, since the story about two Soviet sleeper agents "awakened" in Britain after they've fallen in love with Western culture shared a similar premise. Surprisingly, however, Yost wasn't familiar with Sleepers. "I don't know if Joe saw it or if Joel Fields saw it; I didn't see it."

Asked to what do he attributes the current popularity of the spy genre, Yost answered, "I would say that post-9/11 people understand how important good intelligence is." He sang the praises of Zero Dark Thirty, and said that he admired how it depicts intelligence work as cross-referencing files, tracking down a name. But The Americans, he's quick to point out, isn't quite that reality-driven. "I think for this show that it's that heightened reality. The movie Tinker Tailor did that quite well. I couldn't believe that they could take that book, and that miniseries, and squish it into a 2 1/2 hour film. It might not even be that long. They did a great job. There's just something about that intensity. That everything counts. That it is life and death." He aspires to that same level of intensity on his show. 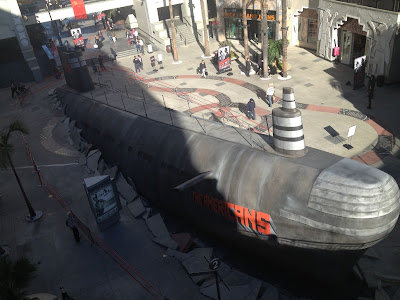 So there are plenty of serious spy shows that influenced The Americans. But what about lighter fare? Personally, I can't imagine spies operating in a D.C. suburb in the 1980s without thinking of Scarecrow and Mrs. King (review here). I asked if that influenced The Americans in any way, and Yost let out a fond chuckle. "I watched so many episodes of that show in the Eighties," he said, "and I never thought of it in connection with The Americans." Hm. So maybe I'm the only one! That doesn't mean, however, that Yost and his colleagues aren't inspired by any less than serious spy fare. "We do take a lot from FX's other great spy show, though," he admitted, alluding to the hilarious animated genre send-up Archer. "We should have an agent from ISIS or ODIN show up." I concur!

Yost concluded his session by quoting the FX Networks President. "John Landgraf said something that I thought perfectly sums it up: 'We know who won the Cold War. We don't know if Phillip and Elizabeth will survive. And that's the story. Will the marriage survive? Will the children survive?'" To find out, tune in to The Americans on FX, Wednesdays at 10/9c.

Read my review of The Americans pilot here.
Posted by Tanner at 6:21 PM