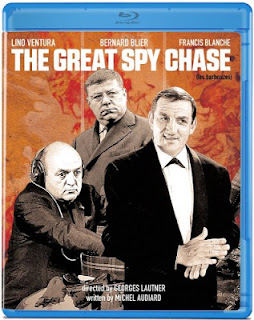 Olive Films will release the 1964 Eurospy classic The Great Spy Chase (aka Les Barbouzes - French slang for "secret agents" as Frederick Forsyth readers are no doubt aware) on Region 1 DVD and Blu-ray on February 26. If you're familiar with the film, let that sink in a moment. Did you ever think you'd see an official American release? If you're not familiar with it, start getting really excited! Les Barbouzes, directed by George Lautner, is one of the all-time great Eurospy movies. And I don't mean that in the way that in an insular way, like it's one of those low-budget slices of cheese that we fans of the genre enjoy so much, but which your average modern movie viewer might scoff at. No, Les Barbouzes is the rare Eurospy film that you can show to your film snob friends and impress them with, too. It's a genuinely great satirical comedy, irrespective of its genre. It's also, unlike a lot of terrific Eurospy movies, not a James Bond imitator. If anything, Les Barbouzes plays more like a parody of the Dr. Mabuse movies, or of the espionage genre as a whole. Full disclosure here: it is a black and white, French language film that takes place mostly in one big house. (Well, a chateau.) While those elements might not sound like the ingredients for a top-shelf Sixties spy spoof, let me assure you that they all gel perfectly. (And just because it's set mainly in one location doesn't mean there isn't any gadgetry or kung-fu fighting!) The premise finds spies of all nations descending (under preposterous covers) on the home of a recent widow who inherited the patent to a new, top secret weapon when her scientist husband died suddenly. Each secret agent wants to secure the weapon for his own nation, and all are pretty much aware of who their competitors really are. Soon people in the house are dying at an alarming rate, frequently in rather hilarious ways. It's a great send-up not only of the spy genre, but also of Cold War politics at large—and America's role in a rapidly changing Europe. Lino Ventura leads the cast as the French agent vying for the widow's affections. Olive's DVD and Blu-ray will present the film in its original 1.66:1 aspect ratio, in French with English subtitles. It's hard to tell from the Amazon listing whether Olive will also include subtitled versions of the bonus material that appeared on the French DVD (including a half-hour documentary and a Lautner commentary), but that's probably unlikely. And if they're not there, I won't be griping. Because the amazing thing is that we're seeing any American release at all of this overlooked gem! Retail is $24.95 for the DVD and $29.95 for the Blu-ray. Both are available for pre-order on Amazon for slightly less.

That same day, Olive will also release on DVD and Blu-ray an earlier Lautner/Ventura collaboration, Monsieur Gangster (aka Les Tontons Flingueurs), which spoofs the gangster genre and laid the groundwork for Les Barbouzes. (I haven't seen that one.) I'm glad that Olive's release slate is starting to really expand, because between Les Barbouzes and the previously announced Innocent Bystanders (as well as the David Niven Euro-caper The Brain, released last year), they're really becoming a savior for spy fans fearing that some of their favorite obscure movies would never see DVD release in the U.S. I hope they've got more Eurospy titles up their sleeves!
Posted by Tanner at 8:20 PM

I'll be adding this one to my shopping list!