New John le Carre Novel Out This May 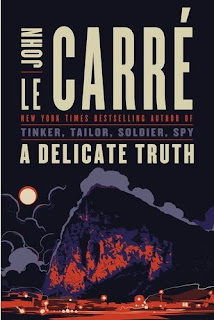 Last month, John le Carré's website announced that the acclaimed spy author would release a new novel in May 2013 entitled A Delicate Truth. And the other day a listing popped up on Amazon, complete with cover art! (Uniform to match the current crop of Penguin le Carré covers by artist Matt Taylor.) A new le Carré novel is always cause for celebration. His last, Our Kind of Traitor, came out in 2010, and demonstrated that the author was still in top form in his sixth decade publishing. I cannot wait for this next one, which, at 432 pages, promises to be his longest in some time. Here's the official description:


A Delicate Truth opens in 2008. A counter-terrorist operation, codenamed Wildlife, is being mounted on the British crown colony of Gibraltar. Its purpose: to capture and abduct a high-value jihadist arms-buyer. Its authors: an ambitious Foreign Office Minister, a private defense contractor who is also his bosom friend, and a shady American CIA operative of the evangelical far-right. So delicate is the operation that even the Minister’s personal private secretary, Toby Bell, is not cleared for it.

Cornwall, UK, 2011. A disgraced Special Forces soldier delivers a message from the dead. Was Operation Wildlife the success it was cracked up to be—or a human tragedy that was ruthlessly covered up? Summoned by Sir Christopher (“Kit”) Probyn, retired British diplomat, to his decaying Cornish manor house, and closely observed by Kit’s beautiful daughter, Emily, Toby must choose between his conscience and duty to his Service. If the only thing necessary to the triumph of evil is for good men to do nothing, how can he keep silent?