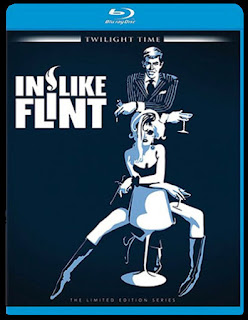 Following up on this month's release of Our Man Flint on Blu-ray, specialty label Twilight Time is releasing the 1967 sequel, In Like Flint, on February 12. And pre-orders for this limited edition begin today, exclusively through Screen Archives Entertainment! Like Our Man Flint, the In Like Flint Blu-ray (which is region-free) comes loaded with special features. And like on the first release, I'm on some of them, discussing (under my actual name, Matthew Bradford) the impact of the Flint movies and their star, James Coburn! Bonus material on In Like Flint includes an audio track featuring Jerry Goldsmith's complete isolated score, an audio commentary with Cinema Retro's Lee Pfeiffer and film historian Eddy Friedfeld, trailers, a rare screen test, and the featurettes "Derek Flint: The Secret Files," "James Coburn: The Man Beyond the Spy," "Designing Flint," "Flint vs Zanuck: The Missing 3 Minutes," "Take it Off," "Puerto Rico Premiere," "Future Perfect," "Feminine Wiles," "Spy School," "Musician's Magician," and "Spy Vogue." Some of these are retained from the previous DVD edition, but some are brand-new documentaries created exclusively for the Blu-ray release by John Cork, co-producer of those wonderful documentaries on the James Bond Special Editions. Sadly what's missing from the DVD release (apparently) is the attempted Seventies TV revival of the character, Our Man Flint: Dead On Target, starring Eurospy leading man Ray Danton as the irrepressible Derek Flint. It's true that the TV movie is far from essential (in fact it bears little resemblance to the Sixties films, and Flint himself is a mere private eye, not an international playboy superspy) and poor Danton (who was excellent in some of his Eurospy work) struggles to fill Coburn's large shoes, but as a spy completist I still want to own it. That means I'll have to hang onto my DVD set despite buying these new Blu-rays. Oh well. The new special features on Twilight Time's edition certainly make this Blu-ray a must-buy for Sixties spy fans even without the TV movie! (And even despite the steep $29.95 price tag.) Like all of the label's releases, In Like Flint is a limited edition of just 3,000 units. These titles sell out, so order soon! Luckily, the first movie hasn't sold out yet and is still available to order through the site.
Posted by Tanner at 5:36 PM

I was very pleased overall with TT's Our Man Flint Blu, and I pre-ordered In Like Flint as soon as it went up for pre-order this afternoon.