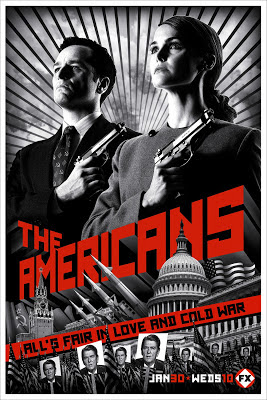 I’ve been excited for The Americans, which debuts tonight at 10/9c on FX, ever since it was first announced. A period spy drama set in the early 1980s, at the second height of the Cold War, about deep cover KGB agents living in suburban America! Created by former CIA officer turned spy novelist Joe Weisberg and executive produced by Graham Yost, whose 1985 non-fiction book Spy-Tech I had permanently checked out from the local library when I was in middle school! It seemed tailor-made to suit my interests. And, I’m very happy to report, it fully lives up to my high expectations.

In the hour-and-a-half pilot episode, we’re introduced to Phillip and Elizabeth Jennings (Matthew Rhys and Keri Russell), an All-American husband and wife with two kids, living in a quiet Washington D.C. suburb… who happen to be long-term, deep-cover operatives for the KGB’s S Directorate. Originally I’d expected this series to be a totally realistic, deliberately slow-paced spy drama in the vein of the Tinker, Tailor, Soldier, Spy miniseries, but as it turns out, it’s more akin to Len Deighton’s (excellent) Bernard Samson novels in tone. It is very realistic, with lots of examples of professional tradecraft… but these agents also see their share of action. Yost describes it as a slightly heightened reality, and that proves to be the perfect mixture for modern American television. It’s grim and gritty, but there’s also a welcome touch of Alias to the proceedings. Phillip and Elizabeth have the training to be kick-ass when duty calls for it. In the first two episodes (provided by the network as a screener), those skills are called for quite a bit. This couple aren’t moles, working government jobs and passing along whatever intel they glean. They’re more utility players. When called upon in the pilot to kidnap a high-profile KGB defector and return him to Moscow for interrogation and execution, they’re prepared to get into knife fights, foot chases and car chases. And when called upon in the second episode to place a bug in the home office of Reagan's defense secretary Caspar Weinberger, they’re prepared to do some real black bag work, and to make use of one of the most notorious weapons in the KGB’s infamous arsenal. They’re also trained in disguise (which, given the era, allows for a succession of entertainingly awful early Eighties hairdos by way of wigs) and seduction. In fact, I was surprised at just how sexually explicit the show managed to be on basic cable. 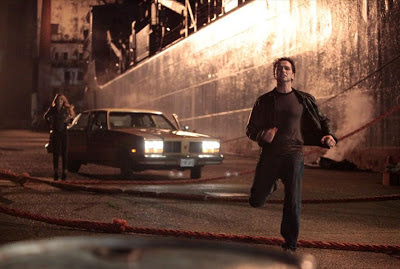 Even if Phillip and Elizabeth are capable of behaving like James Bond and Sidney Bristow on the job, at home they have to live their cover. These two agents never met and fell in love and got married; instead they were assigned to each other as partners by the KGB, and instructed to have children in order to keep up appearances. As the show begins, they’ve lived together for years, but they are not in love. (Nonetheless, it clearly disturbs Phillip to listen to the tapes of his wife seducing an FBI official to extract valuable information.) Their children, of course, have no idea that their parents are anything other than average Americans. It clearly pains Elizabeth to listen to her daughter repeat a teacher’s assertions that the Soviets are undermining arms negotiations with their sneakiness, but all she can do is lash out passive aggressively; she must maintain her cover in front of her child. Phillip, meanwhile, finds himself cheering along with his flag-waving son at a patriotic school assembly in honor of an Apollo astronaut. But while they’re hiding their true feelings in these circumstances, they’re also struggling with the same issues as any parents… and just possibly, becoming a little seduced themselves by the decadent, Capitalist American culture they live amidst.

Meanwhile, the Jennings' lives are made all the more stressful when their new neighbor, Stan Beeman (Fair Game's Noah Emmerich), turns out to be an FBI counterintelligence officer! Is he there to keep tabs on them because they’re under suspicion, or is it really just a coincidence? Rather than drawing out the improbable, Weisberg wisely deals with this possible coincidence head-on, and audiences and characters alike get a pretty definitive answer by the episode’s end. Beeman is a regular character, and through him and his partner, Agent Amador (Maximiliano Hernandez), we get the American perspective as well as the Soviet one. In short order, he’s got an informant inside the Russian embassy and they have one inside the FBI, setting up what should prove an interesting cat-and-mouse game for the duration of the season. 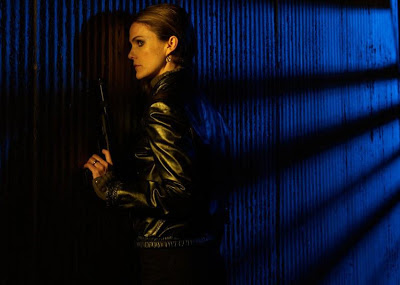 The hardest sell going into this series must have been the question of making modern American television audiences root (to an extent, at least) for KGB spies working against the United States. Weisberg, Yost and director Gavin O'Connor achieve that feat quite brilliantly, as it happens. In part, it has to do with being 30+ years removed from this point in history (while still close enough in memory to stimulate nostalgia among viewers of a certain age, especially when we’re treated to actual 1981 news broadcasts), and in part it has to do with the comfort of knowing how the Cold War turned out. (Though, as Yost points out, we don't know if Phillip and Elizabeth or their family survive it, ensuring that the series still generates suspense.) But it also has a lot to do with the characters themselves and the circumstances they’re living in. We’ve seen enough spy shows over the years to be able to quickly relate to anyone living in these stressful circumstances, no matter what side they're on, and some of those circumstances (the domestic ones) are easy for most audiences to identify with anyway. Russell and Rhys are both excellent, and make it easy to relate to these characters even when (particularly in her case) they present a cold veneer. Flashbacks integrated throughout the pilot revealing their training period in Russia win our sympathies even further. Overall, I don’t think audiences who warmed to brutal Mafiosi over six seasons of The Sopranos will have any trouble identifying with Phillip and Elizabeth.

The Americans is off to a great start, and I can’t wait to see where it goes from here. In many ways, this is the spy show I’ve long been dreaming of, and so far, I’m not disappointed. It covers so much of the spy spectrum that I think le Carré fans and Alias fans alike will all find something to entertain them.

Stay tuned for an interview with The Americans executive producer Graham Yost discussing his own spy influences later today.
Posted by Tanner at 10:32 AM