Movie Review: Peau d’espion aka To Commit a Murder (1967)

Peau d’espion turns into a pretty decent spy movie in its second half, though to get to that you have to sit through a slow and confusing first half. Characters appear without any real introductions to speak of, and we’re offered no context for their actions. I suspect this is supposed to be artistic, but it comes off as kind of sloppy instead. Still, when these characters we don’t know are played by Senta Berger (The Quiller Memorandum) and Louis Jourdan (Octopussy) in their prime, they’re fun to watch even if we have no idea what they’re up to! Spy movie regular Berger is as lovely as ever—lovelier, actually, as a redhead—and Jourdan oozes a sophisticated Euro-cool in the Marcello Mastrioni/Jean-Louis Trintignant mode armed with hip sunglasses and an ice-cold stare. It’s kind of a treat for Bond fans to see Prince Kamal Khan as a good guy spy. Of course, we don’t know up front that he’s a even a spy, and “good” is a relative term in the Eurospy realm, because the heroes are often fairly loathsome. (I’ll get to that in a minute.) 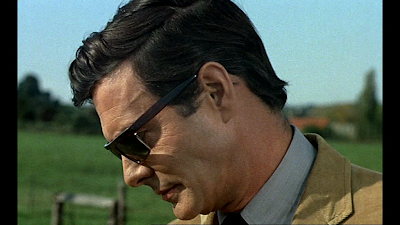 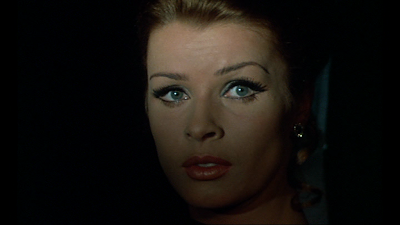 Jourdan is Charles Beaulieu, an author and a gambler and a bit of a cad. Berger is Gertraud Sphax (talk about an anti-Bond Girl spy name!), a married woman who picks him up twice but goes cold just when things start to get interesting. (All the inconveniences of having an affair without the fun, he complains.) Her husband has a fashion-conscious thug with a Jag following her around, which leads to a somewhat lackluster car chase that still manages to be the highlight of the film’s first half. The sped-up chase through Paris isn’t terribly impressive as car chases go, but it’s still an E-type Jaguar chasing Senta Berger through the streets of Sixties Paris, so that’s something! (Also, the chase leads Jourdan to deliver the immortal line, "The only thing I admire about you is your Jaguar.") 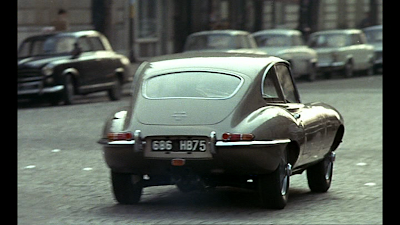 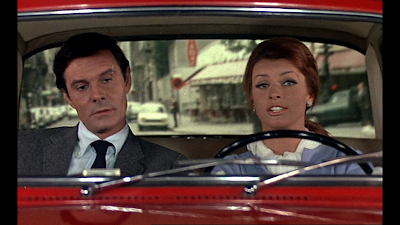 Nearly a half hour in, a plot finally starts to manifest itself when Charles is summoned to see his former commanding officer from his army days, Major Rhome (the excellent Bernard Blier, from The Great Spy Chase). Rhome now works for the SDECE (French Intelligence), and he likes how close Charles has become with Gertraud, because her husband, Harris (Edmond O'Brien), is the editor of a popular leftist magazine and, Rhome suspects, sympathetic to the Red Chinese. He’ll also be accompanying Henri Banck, a French missile scientist with "a degree in crystallography” on a trip to Heidelberg, where Rhome fears Harris will help Banck defect to China. 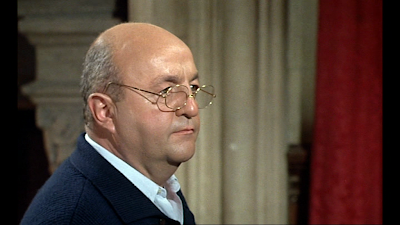 So it’s finally clear that Charles is a spy (sometimes, at least), and since he’s working against the Communists I guess that makes him a good spy. This being Eurospy territory, however, he’s not necessarily that good a spy-guy. True to the subgenre, in fact, he’s kind of a jerk. In one scene, he goes into a Parisian bar and acts like an asshole for no reason whatsoever, first hitting his boss and friend, Major Rhome (and clearly enjoying it), and then picking a fight with long-haired hippy kids just because they have long hair. (He fights them by slapping them repeatedly, apparently because he doesn’t think them worthy of man-punches.) At one point, he dodges one of their punches intentionally so that it lands on the woman he’s just been dancing with, square in the face. Afterwards, he cringes at her black eye, but still hands her his card and instructs her to, “Call me… when you’re able to read my number.” He also stands by and watches with what appears to be smug satisfaction as his pal gets beaten up by the hippies because of the fight he started. None of that is motivated in any way by his mission or by the story being told; it just happens because he’s a jerk. But at least the pointless bar fight is edited in a dynamic fashion, cutting on each punch or slap to a close-up of abstract Sixties wall art, all to the diagetic strains of a catchy pop instrumental on the bar’s juke box. It’s pointless, but stylish. 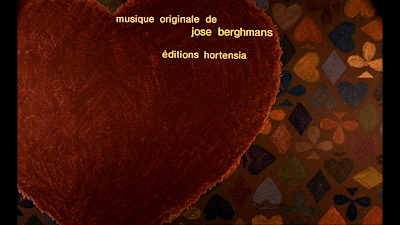 Style is something this movie has in excess, starting right off the bat with a fantastic and beautiful title sequence which prefigures Daniel Kleinman’s use of playing card suits in the Casino Royale credits. The cinematography is gorgeous as well, to match all the gorgeous Sixties fashions on display throughout the film. The editing is also stylish. It’s never quite as trendy as it is during that bar fight, but it’s always interesting and highly visible. There are times when visible editing is a bad thing for a film, but in this case it’s a boon rather than a distraction. 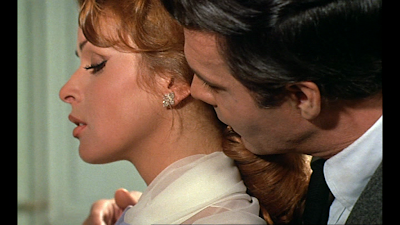 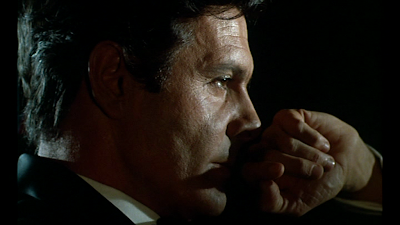 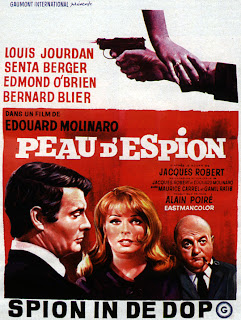 There are a lot of agents and double agents playing very complicated games on one another, but none of that is remotely clear to the audience until the final half hour. We don’t even know that it’s happening until then! We’re not given enough information early on to even suspect. By the end of the movie, though, hardly any character turns out to be who you thought they were at first. Everyone’s spying for someone, but to reveal who’s on what side would spoil the fun. It all builds up to quite a compelling moral quandary for Charles, however—one which justifies the film’s somewhat unspyish English language title To Commit a Murder. Ultimately, despite its confusing beginning (and despite a touch more propaganda than this type of film usually boasts), Peau d’Espion is well worth watching for fans of the more serious side of the genre. But it requires patience to get to the interesting stuff. Its artistic ambitions are considerably higher than a lot of Eurospy fluff, though, so even when you’re confused, there are at least plenty of visual treats to behold. 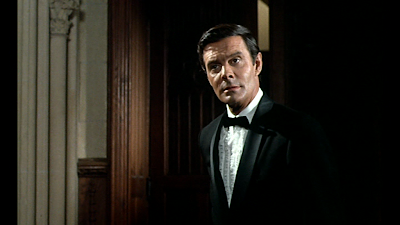