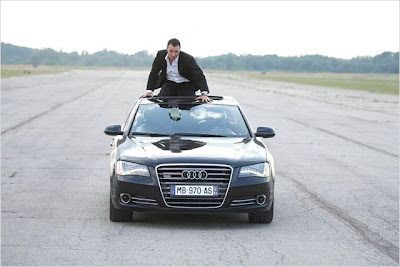 America might be the only territory that still hasn't seen the Transporter TV series (or has it not yet aired in Britain either?), but it's been a big enough hit in the rest of the world that a second season is in the works. However, the show is going to be retooled for that second season. That's hardly a surprise for this troubled production, considering it was already retooled several times during the filming of its first season, and went through several different showrunners! Now, according to The Hollywood Reporter (via Screen Crush), a heavy-hitter is being brought in to run the next season: The X-Files' Frank Spotnitz, whose recent spy credits include two Cinemax hits: the first U.S. season of Strike Back and the Melissa George series Hunted. Spotnitz's involvement would seem natural given that Transporter was originally set to air on Cinemax as well (in the USA anyway), but Cinemax has since backed out and the international producers are seeking a new U.S. partner. Huh. That's very frustrating news! I'd been eagerly waiting for this series (since it was first announced nearly three years ago!), and would have actually added a Cinemax subscription to my cable just for it, something I didn't even do for Strike Back or Hunted. Their loss! Hopefully now it ends up on a channel I already get. (Spike TV would seem like an obvious match for the material, or USA.) If the American networks drag their feet too much, U.S. fans with all-region players can always buy the import DVDs, which are coming out in just about every country now.

Chris Vance (Burn Notice) took over for Jason Statham in the TV version of the neo-Eurospy vehicular actioner. According to the trade, Vance "is still attached to the TV series, though his option period has expired and a second-season gig would require a new deal." Let's hope that all comes together, and that Spotnitz manages to attract a new U.S. network partner! Come to think of it, I wonder if his involvement might spark Cinemax's interest anew? He's already working with them on a new miniseries about Sam Hunter, the lead character from Hunted. And Strike Back, which he's no longer involved with, remains a big hit for the cabler.

As far as I know, the Transporter TV series is completely separate from the new trilogy of Transporter movies that were recently announced. Hopefully those movies will bring back Statham.


Anyway, until some American network comes on board, here's a glimpse of what we're missing:

Hunted wasn't exactly a hit in the UK; it's why the BBC pulled out of any second season before the first had concluded here. Cinemax will have to pull out their parts of the IP from those of the BBC for anything else.

Very true, Silent Hunter. I didn't want to go into that in this Transporter story, but that's why I called it a Cinemax hit and not a BBC hit. You can read more about the Hunted situation by following the link in the story.

It's funny: I feel like I've written a million stories about Hunted and its odd fate without ever having seen it, and each time British commenters pop up and say it was a lousy series and American commenters pop up and say it was great! The same trans-Atlantic division occurred among critics--and clearly with audiences as well. Each time, it made me more and more curious to finally SEE this show that had people so divided! Well, I finally watched it, and I liked it a whole lot. Despite my all too evident Anglophilia, I suppose this proves I'm a red-blooded American after all! The conclusion was a bit disappointing, but most of its problems seem to stem from the fact that it was meant to carry on into a second season. I really hope that even with the change in format, Cinemax's 4-part Sam Hunter miniseries is able to answer some of the questions they left hanging at the end of Hunted! At any rate, I'm very eager to see the continuation. I'll do a full review of Hunted at some point...

Transporter wasn't a success, at least not in Germany. A truly awful show, boring, by the numbers plot, lousy acting. A waste of time.

On the other hand, it is hard to image a concept more unsuited then The Transporter for a series. A guy driving from a to b, repeat every week. Not what I would call interesting.

I suppose that's why Spotnitz is being brought on to rework it for its second season--and probably why Cinemax opted out. I'm sorry to hear you didn't like it. I'm still hopeful maybe I will; that trailer looks good! And many shows have managed to sustain flimsier premises over the years... Then again, I certainly wasn't a big fan of the way that Spotnitz "reworked" the intelligent UK version of Strike Back into mindless (if still fun), silly action for American audiences. Of course, mindless, silly action is exactly what Transporter calls for!

According to the HR article, the series "performed well in France and Canada and for some Fox International territories." So I guess you have primarily French speakers to thank (or not) for its second season! I wonder if it will even return in Germany if it didn't do well there?