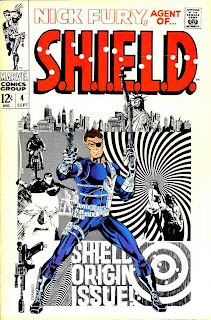 There's a new trailer out for ABC's upcoming comic book-based spy series Marvel's Agents of S.H.I.E.L.D. (Via Dark Horizons.) Unlike the last one we saw, this spot incorporates footage from episodes beyond the pilot. Perhaps it's the choice of music, but to me this looks much more like a Joss Whedon show than a S.H.I.E.L.D. show. Personally, I love both Joss Whedon shows and S.H.I.E.L.D. comics, so that's not any sort of accusation, merely an observation. I'm fully aware that this show won't be a direct translation of the 1960s Steranko comics I love so much, but I do hope that it finds clever ways to embody their spirit! Those comics themselves, products of that decade's spy craze, owed a lot of James Bond and The Man From U.N.C.L.E., but Jim Steranko mixed in spandex and superheroics and surrealism and psychedelia to create a really unique, anything-goes take on spy-fi. As previously announced, Steranko's entire run on the series (which started out in the anthology comic Strange Tales before graduating to its own title) will be reprinted in a single volume this fall to tie in with the ABC show. For more background on the comic and the history of the fictional spy organization, read my full S.H.I.E.L.D. primer here.

Jim Steranko eh? I guess that the writers of Leverage must have been SHIELD fans; there's a common brand of safe in the show called Steranko.

Oh yes! I got a huge kick out of that the first time they said it! They always drop a lot of names on Leverage. I remember one of them used the alias of "Guy Hamilton" on one episode! And there was another where the passengers on an airplane were al named after Doctor Who actors. I think every episode had some good Easter Eggs with the names. Another great tribute to Steranko came in the early 90s teen spy movie If Looks Could Kill, where Roger Rees' villain was named Steranko. If Looks Could Kill is no classic, but I definitely have a soft spot for it.