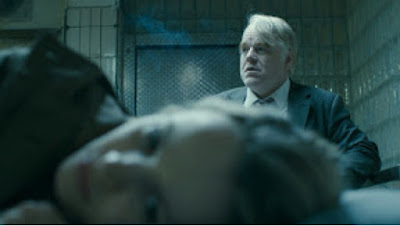 The next John le Carré movie, Anton Corbijn's A Most Wanted Man, has secured a U.S. distributor. Variety reports that Lionsgate will release the picture in the United States, but has not yet set a date for it. I really hope they're able to get it out in time for awards consideration this year, though that seems like a fast turnaround. I'm dying to see this one! As regular readers know, this adaptation of le Carré's 2008 novel stars Philip Seymour Hoffman, Rachel McAdams, Willem Dafoe, Robin Wright and Nina Hoss. A Most Wanted Man is set in Hamburg where the worlds of banking, terrorism, espionage, immigration and extraordinary rendition intersect tragically. Hoffman plays German spymaster Günther Bachmann; Hoss (who was wonderful in the understated 2012 German spy film Barbara) plays his invaluable associate Erna Frey; Dafoe plays Scottish banker Tommy Brue (assuming the character is still Scottish); McAdams plays the idealistic immigration lawyer Annabel Richter, and newcomer (to English language cinema, anyway) Grigoriy Dobrygin has the crucial role of Chechen immigrant Issa Karpov. Wright plays a CIA operative whose methods clash strongly with Bachmann's. I love that we're seeing a whole new wave of le Carré movies, but I was thinking the other day that it's a pity his work is missing from television. There are some wonderful limited series about espionage being produced right now on both sides of the Atlantic, and le Carré's books lend themselves wonderfully to that format! I wish we could have a few le Carré miniseries mixed in with all these films! He's got a large enough catalog to easily fuel both mediums... But perhaps I'm being greedy.
Posted by Tanner at 8:02 PM

Recently read and enjoyed the book. Looking at the various fall movie previews, I think a late February - early March 2014 release would be good for this type of film. Of course, I would always welcome a yearend release. That would be a nice holiday present.

Yeah, that seems more likely. Or, if they really want to push Hoffman for an award but don't think they can make awards season THIS year, I suppose they might put it off until NEXT Fall... which would suck. I want it NOW!!!!