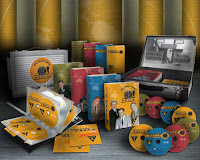 After months, years of speculation, The Man From U.N.C.L.E. is finally, officially coming to DVD. (Doesn't that sound familiar? How many times have I reported it in various stages?) As previously announced, it will be available exclusively from Time Life, and exclusively online, starting Nov. 27, 2007. And now, TVShowsOnDVD has the full press release, listing all the features, and displaying a nice, big picture of the whole set in all its deluxe packaging glory! It's all housed inside an attache case, and it looks good. Imagine if MGM/Fox had realized their own plans to put the complete Bond collection in an attache case as well? Wouldn't those two sets have complemented each other nicely? Oh well.
Besides great packaging, the set boasts all kinds of cool bonus features. As far as I can tell, though, it doesn't list commentaries, which is too bad because we know that Robert Vaughn recorded some for Anchor Bay way back when that company was planning to release the series. It does, however, include Ian Fleming's original notes on the series, which should be cool to see. Head on over to TVShowsOnDVD for all the details, or to Time Life to order the whole set now for $249.99.
Posted by Tanner at 1:24 PM