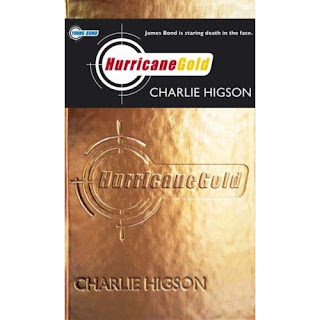 Hurricane Gold Out Today In UK!
Today sees the UK release of the newest James Bond novel, the eagerly-awaited Hurricane Gold by Charlie Higson, latest in his series of "Young Bond" adventures. And its release is a good occasion for me to once again shamelessly plug this series for anyone who will listen! I’ve said it before, but I know that it needs to be said again and again (because I still hear Bond fans who haven’t read them complain that these aren’t "real" Bond books): these are among the very best of the post-Fleming continuation novels. In my opinion, they are as "real" as Amis or Gardner or Benson. And unlike those latter two, who updated 007 to the eras in which they were writing, the Young Bond stories actually take place in Fleming’s continuity; they’re set in the 1930s, the boyhood era of the famous Cold Warrior who was in his prime in the Fifties and Sixties.
I can understand the argument that the basic premise (young James stumbling upon various fantastic adventures around the world) is a little hard to swallow, but is there any reader who actually swallows all of Fleming’s premises? Of course not! You accept them at face value (easy enough to do in the context of Bond’s world) and enjoy the ride. And that’s what you have to do with Higson’s books as well. Furthermore, he goes to great lengths to make the scenarios as believable as possible. The young James is not a junior secret agent like Alex Rider; he’s an Eton student (strictly adhering to what little Fleming established about his creation’s boyhood in You Only Live Twice; yes, he's due to be kicked out for "trouble with one of the other boys' maids" in the final volume!) who becomes embroiled in scenarios of large and small-scale intrigue rooted in the historical era.
And the novels are well-written. Very well-written. Higson is a gifted novelist who can both tell a story and turn a phrase. Sebastian Faulks, in fact, will find him a hard act to follow when his new "adult" Bond novel, Devil May Care (also set in the continuity of the original Fleming adventures) comes out next spring! Just as Samantha Weinberg’s Moneypenny Diaries series turned out to be so much more than "007 for the Bridget Jones set," Higson’s books succeed far beyond their "James Bond by way of Harry Potter" premise. Ian Fleming Publications may have raised eyebrows with their rather transparent publishing schemes, but they deserve a lot of credit for picking the right authors to pull off such potentially disastrous set-ups. If you’re a Bond fan and you haven’t yet read his adventures as a young man, now is the time to start.
It’s also a good time to re-examine past coverage of Young Bond on the Double O Section:
An Introduction to Young Bond, and a Comparison to Alex Rider
A Review of Double Or Die, Higson’s Last Book
A Review of The Young Bond Rough Guide To London
Various Young Bond News Items
And for up-to-the-minute coverage of all things Young Bond, look no further than the excellent Young Bond Dossier. YBD offers the most extensive reportage on the web about Hurricane Gold. Head on over there for news about the shiny gold, gilt-edged cover design, the spiral-bound proof edition that’s already selling for insane prices on Ebay, the signed, numbered copies available exclusively from independent bookstores in the UK, the audio book, the eventual American publication date, and an exclusive, in-depth interview with Charlie Higson covering the series’ past, present and future!
Posted by Tanner at 12:11 AM

Thanks for the kind words about my site, sir. :) Hurricane Gold is fantastic! I too can't believe some fans STILL refuse to read these books based on concept alone. Their loss, because these are great BOND novels.