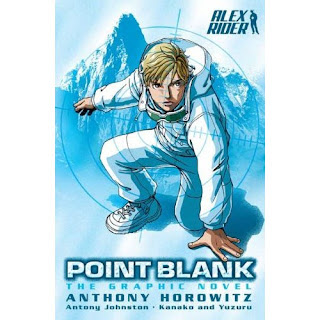 Good news for fans of Anthony Horowitz's teen spy series! Even though the first movie based on his bestselling books tanked at the U.S. box office (thanks mainly to a non-existent marketing campaign from The Weinstein Company), the series of graphic novel adaptations will continue. Why would there have even been a question of its not happening? Because the first one, Stormbreaker, was based on the movie Stormbreaker, not the book. (There were some key differences between the two.) Adapter Antony Johnson, no stranger to the world of spy comics (having written the only Queen & Country mini-series not penned by creator Greg Rucka), said in an interview last year that the second graphic novel, Point Blank, would be adapted from the novel and not the film. But then there was no sign of it. Amazon now lists a December 27 release date in America and England. Both countries are going with the far less clever American title, Point Blank, instead of the British Point Blanc. (It's a pun, see? "Point Blanc" is a French location in the book.)
I'm really glad that we'll see Point Blanc adapted into some visual medium. I haven't read all the Alex Rider books, but of the ones that I have, it's my favorite. I think it would actually make a much better movie than Stormbreaker, so I still hope we see one eventually. In the mean time, I'll happily take the comic. As Stormbreaker more or less followed the plot of Ian Fleming's Moonraker (the book, mind you, not the film), Point Blanc is rather cavalierly adapted from the Fleming's On Her Majesty's Secret Service. James Bond himself, in his Alex Rider-inspired young incarnation (confused?), will star in a comic adaptation of the Charlie Higson's first Young Bond novel, Silverfin, next year. That graphic novel will be illustrated by Kev Walker.
Posted by Tanner at 4:30 PM

I'll definitely have to check out the Alex Rider graphic novel. While the film wasn't perfect, I did enjoy it. It made me want to read some of the Alex Rider stuff out there.

I think the graphic novel would probably be a great stepping stone from the movie into the books. Since it follows the first comic, and that was based on the movie, the second one will have to work off that basis and ease you into the slightly different world of the literary Alex Rider! Plus, that's a pretty cool cover.

From the blurb on the back:
"Can Alex Rider survive the poison of the Snakehead?

No sooner has Alex splashed down off the coast of Australia than he finds himself sucked into another adventure. This time he's working for ASIS - the Australain Secret Service - and his target is the criminal underworld of South-East Asia: the ruthless world of the Snakehead..."

Naturally, with Aus content I am quite keen to read it. But it does have a bit of competition. Usually the Young Bond books are ignored over here, but this time Hurricane Gold has been released simultaneously with the UK (we usually get the books a year later). The Australian version of Hurricane Gold is a paperback edition that minics the gold Hardback English edition. It even has the thin wrap around - like the Hardback.

For fans of espionage fiction, it's a good time for young (and old) readers.