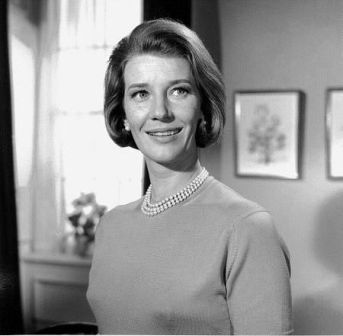 Very sad news. One of the defining faces of the James Bond fanchise has passed away. The original Miss Money-penny, Lois Maxwell, died yesterday at the age of 80 in Free-mantle, Australia (near Perth), where she had made her home for some time. According to the AP obituary, her friend and frequent co-star Roger Moore said she'd been suffering from cancer.
Born in Canada with the name Lois Hooker (changed for obvious reasons when she entered show business), Maxwell toiled in relative obscurity for fifteen years before finding international fame in the Bond series. During that time she made her spy debut in the 1956 movie Passport To Treason, directed by future Saint producer Robert S. Baker, and even won a Golden Globe for "Most Promising Newcomer" for her role opposite Ronald Reagan and Shirley Temple in That Hagen Girl (1947). Despite wholesome, girl-next-door looks that ran counter to the femme fatale image of the genre, she seemed destined for spy stardom. Maxwell guest-starred on TV shows O.S.S. and Danger Man before being cast in the first Bond film, Dr. No in 1962.
Thanks in part to the crackling script by Richard Maibaum and Johanna Harwood, she imbued the character with a spark not found in Fleming's novels, and elevated the role from window dressing to essential co-star. Her running flirtatious banter with Connery's 007 captured the public's imagination so much so that more than four decades later Fleming's literary estate commissioned a series of novels focusing on Moneypenny, written by Samantha Weinberg under the nom de plume Kate Westbrook. Even though the books are clearly set in Fleming's literary world, there's no doubt that the inspiration was the Moneypenny of the films, the Moneypenny of Lois Maxwell.
Maxwell sealed her association with the role by reprising it in From Russia With Love, which features what is probably the quintessential Bond/Moneypenny interplay. Throughout the Sixties, besides a small role in The Haunting and her continuing contribution to the ongoing, wildly popular Bond series, she worked mostly in TV, guesting on many more spy shows. She re-teamed with Robert Baker for two episodes of The Saint, where she worked with Roger Moore for the first time. (The two already knew each other from drama school, and remained fast friends.) She was cast against type as a killer in her first Saint guest spot, "Interlude In Venice," and also played an evil nun on The Avengers. Besides those roles, she made a tour of virtually all the British spy/adventure shows of the decade, including The Baron, Department S and Randall and Hopkirk (Deceased). She also appeared (in a very Moneypenny-ish role) in the Italian Bond spoof Operation Kid Brother, starring Sean Connery's brother, Neil. So did Bernard "M" Lee. According to Maxwell, Connery was furious with them for participating in a film that he saw as exploiting his brother, and never fully forgave either colleague.
In the Seventies, Lois Maxwell worked again with her old friend Roger Moore on The Persuaders shortly before he took over as the new James Bond. She continued to play Moneypenny throughout his tenure, acting in a total of fourteen Bond films (a record surpassed only by Desmond Llewelyn as Q) opposite three lead actors. When Timothy Dalton was cast as the fourth 007, it had become necessary to recast the part with a younger woman, and Caroline Bliss filled in for two films. Samantha Bond played Pierce Brosnan's Moneypenny, and the role was sorely missing from Daniel Craig's debut in Casino Royale.* Pamela Salem (looking very Maxwell-ish) filled in in Connery's non-canonical encore Never Say Never Again. But no matter who has played the part since, or will in the future, Miss Moneypenny is forever associated with Lois Maxwell. She is the originator of the role, and sure to remain the longest-running player in the part. She is to Moneypenny what Sean Connery is to James Bond, and was arguably as big a part (along with Llewelyn) in defining the series as he was.
I met Ms. Maxwell once in 1995, and found her to be extremely friendly and gracious. The screen has lost one of the great supporting players of all time, and she will be remembered forever through her incalculable contribution to the James Bond franchise.

*Even though Barbara Broccoli has publicly stated that there are currently no plans to reintroduce the Moneypenny character into the series, I think it would be a wonderful tribute to Maxwell if they did so in Craig's second outing. Lois Maxwell created a character who has seeped into the public consciousness almost as much as Bond himself , and the character deserves to live on.
Posted by Tanner at 12:00 PM

I was so sad to hear the news about Lois Maxwell's passing. I grew up with her as Miss Moneypenny in the Roger Moore films. She will always been Moneypenny to me. She will be sorely missed.

This is a wonderful tribute to someone who gave us so much.
Rest in peace, Miss Moneypenny.