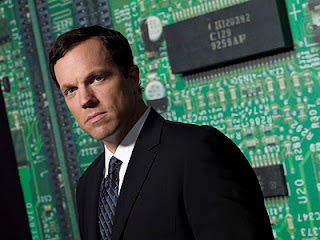 Well, I’m changing my mind after watching Chuck a second time tonight. I liked it quite a lot. I still think that Chuck himself is a bit sub-Seth Cohen, but he’s appealing nonetheless. The supporting characters are good too, even if the best friend is better in small doses.
The basic premise finds a professional nerd (as in "Nerd Herd," the fictional equivalent of Best Buy’s "Geek Squad" computer technicians) named Chuck transformed into a spy by... well, that’s not important and it barely makes sense. But average Chuck suddenly finds himself in some extraordinary circumstances, such as the aforementioned ninja fight (which is still funny, despite being severely trimmed since the Comic-Con version), a car chase (somewhat reminiscent of The Bourne Identity) and defusing a bomb. Zach Levi plays baffled well, and Yvonne Strahovski and Adam Baldwin are amusing as the rival secret agents keeping tabs on him.
Director McG handles all the action scenes with style and skill (which is hardly a surprise), even on a TV budget. It will be interesting to see if producers manage to keep every episode as action-packed as the pilot. Speaking of action scenes, Chuck kicks off with an exciting parkour sequence, in which a burnt spy attempts a daring escape. I think this scene is a testament to how large James Bond still looms over the genre. After GoldenEye, all wannabe spies needed a bungee jump scene. And after Casino Royale, it’s parkour that’s become shorthand for thrilling espionage action. Pay attention, those who claim that Bourne has usurped Bond’s spot atop the pile of spies!
NBC's new spy lineup continues Wednesday night with the all-new Bionic Woman.
Posted by Tanner at 11:24 PM