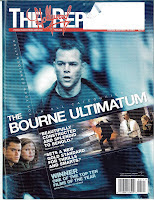 Universal have started promoting The Bourne Ultimatum "For Your Consideration In All Categories" as of today's Hollywood Reporter. It would be nice if this stellar spy movie actually gets some legitimate recognition! Meanwhile, poducer Frank Marshall talked to ComingSoon.net about the prospects for a fourth Bourne movie:

"There were only three books written. I know they've written a fourth [The Bourne Legacy by Eric Van Lustbader, who also wrote a fifth] but it wasn't written by Ludlum," Marshall said. "Look, we would love to continue the franchise. We just need a great story, and we're not going to do it unless we have a great story, but we are working on coming up with one, and Matt said to me, ‘Look, you hand me a great script, I'm in.' Unfortunately, we're not able to do any writing at the moment [due to the writers' strike], but we're all thinking about it."

Sounds to me as close to an announcement as we're likely to get. Damon's in, Marshall's in; it all depends on a good script, and presumably that's just a matter of time. Great news!

Be sure to read the rest of ComingSoon's interview for bits on Marshall's other projects, including Indiana Jones and the Kingdom of the Crystal Skull.

I really enjoyed the Bourne films. If they can come up with a intelligent script that isn't just trying to cash in, then I would love to see another film.

I think they can. They didn't actually follow any of the book plots so far, so they clearly don't need them, yet they still made an amazing movie the fourth time around. I think the franchise still has legs. They will need to move beyond the amnesia at this point, though, I think. The books dropped that after the first one. It can only get you so far... I do hope the series continues, though. I haven't read either of Van Lustbader's books, but I think "The Bourne Legacy" is a good title.