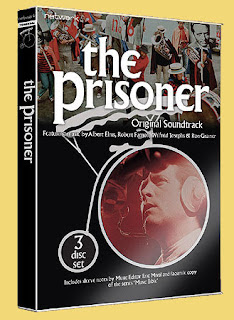 There is another announcement of interest to spy fans (besides the exciting DVD news) on Network DVD's recently updated website... They've finally made good on their promise of a year ago to release some soundtrack CDs for some of the classic ITC shows they've been doing such a great job of issuing on DVD! First out of the gate is a new CD set of original music from The Prisoner, a nice companion piece to their recently issued, remastered special edition DVD set of that show. Compiled from the original master tapes for the series by music editor Eric Mival, Network promises, "This album comprises the vast majority of music specially composed for the series (including a number of unused cues) presented in the order they were recorded." No doubt that will mean some overlap with the existing Silva Prisoner CDs, but Silva's discs contained a lot of library music featured in the show, and Network's seems to focus on original material, so there should be lots of previously unavailable treasures as well. The discs come out January 14 exclusively available through Network's website, and can be pre-ordered now at a £5 discount.
Last year's announcement also promised soundtrack releases for The Saint and The Champions, so hopefully those are still forthcoming! I remain ever-hopeful that this soundtrack series will also eventually produce a disc of Ken Thorne's amazing incidental music from The Persuaders, by far my favorite unreleased spy music...
Posted by Tanner at 8:29 PM