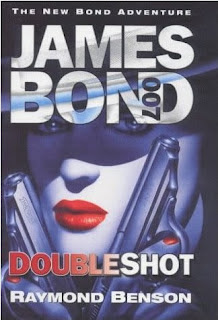 Former James Bond author Raymond Benson has announced on his website that three of his Bond books will be re-released next year as an omnibus--along with the highly sought after short story "Blast From the Past!" I'm a little bit surprised, since Ian Fleming Publications has been pretending like none of the previous continuation novels ever existed in their publicity for Sebastian Faulks' upcoming Devil May Care, but I'm also thrilled. I've been hoping for a while that Benson's and John Gardner's Bond novels would be reissued as omnibuses, and now that's exactly what's happening... with Benson, anyway. Pegasus Books will publish this anthology, comprising the author's "Union Trilogy" of High Time To Kill, Doubleshot and Never Dream of Dying. The middle title is Benson's very best book, and one of the strangest Bond stories ever told. The other two are unfortunately his weakest. (Never Dream of Dying contains a bold twist sure to irk Fleming purists for years to come. I respect Benson for attempting it, but it didn't work for me.) The real treat of this collection is the inclusion of "Blast From the Past" (which I think was also the title of a completely unrelated James Bond Junior episode...), a short story initially published in Playboy and never before collected. It will also be appearing in its entirety for the first time in English, as the Playboy version was severely cut. Pegasus are also planning a second volume (presumably depending on sales of the first one), which would hopefully contain the author's remaining original novels and two other short stories. I'm so glad that Benson's short stories are finally being collected somewhere. Tracking down old magazines can be tough, and there aren't enough of them to warrant a collection, so inclusion in an omnibus is the perfect solution. Maybe this format will one day provide a place for Samantha Weinberg's Moneypenny short stories, too--in an omnibus of all of her James Bond writing. In the meantime, it's great news that Benson's Bonds will be back in print! His tenure as continuation author has been unfairly overshadowed (coming at the end of the last regime at IFP, and never properly promoted by the publisher), but like the overshadowed Dalton era of films, uncovering it is rewarding. Benson also wrote the best companion book ever about 007, The James Bond Bedside Companion, which is currently out of print.
For more information on the new omnibus, visit The Literary 007.
Posted by Tanner at 11:02 AM