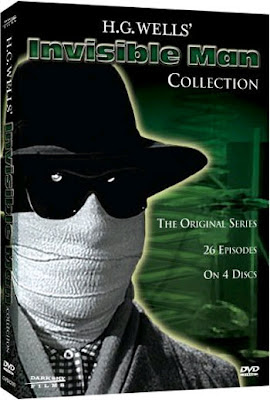 TVShowsOnDVD.com has had a slew of news lately on new (and old) spy TV titles coming to DVD early next year! First, and most excitingly, they reveal that Image Entertainment plan to re-release the classic Robert Culp/Bill Cosby series I Spy in newly-remastered season sets on April 29, 2008! All three seasons will come out the same day, each very reasonably priced at just $19.98. So hold off and don't shell out $80 for those old, out of print boxes from Amazon sellers! I Spy was originally issued very early on in the TV-on-DVD game, and episodes were released in single-disc themed collections (generally by location, but sometimes by director like "The Robert Culp Collection Vols. 1 and 2," to which the star/director contributed commentaries). These were soon bundled up into three box sets (Vols. 1-3), but ended up in a random order and not by season. Interestingly, these old Image boxset releases were the very first DVDs ever to utilise the "slimline" packaging which has now become (thankfully!) common with boxsets. Unfortunately, they still hadn't figured out that you can actually fit two discs to one slim case, so now those old sets that were once impressively compact actually stand out on the shelf as being rather bulky. No word on how the new season sets will be packaged, but I would guess it will be more economical.

The site also reports that Dark Sky Films will bundle their two season sets of of the 1958-59 series H.G. Wells' Invisible Man together as H.G. Wells' Invisible Man Collection on February 26. Retail is $39.98. This incarnation of The Invisible Man re-invisioned Wells' creation as Dr. Peter Brady, an agent for British Intelligence. (Brady even got a cameo in Alan Moore's recent graphic novel The League of Extraordinary Gentlemen: Black Dossier, though he was described as an inferior stand-in for the original Invisible Man, Hawley Griffin.) It was the first attempt at a spy show for producer Ralf Smart, who went on to perfect the genre when he created the incomparable classic Danger Man, starring Patrick McGoohan. Invisible Man also features scripts from future Avengers mastermind Brian Clemens (as well as other writers who would go on to contribute to both of those shows), and early appearances from a number of actors who would become familiar faces in British spy shows and movies of the Sixties, including Honor Blackman, Desmond "Q" Llewelyn, and soon-to-be Moneypenny Lois Maxwell. Both seasons were previously available individually with very cool lenticular artwork. I hope the collected version retains this packaging!

Finally, our friends at TVShowsOnDVD also provide the tantalizing revelation that America's own leather-clad answer to Emma Peel and Cathy Gale, Honey West, is at long last headed to Region 1 DVD! Honey (Anne Francis) was technically a private detective and not a spy, but the show took a lot of cues from The Avengers--and not just in the wardrobe department! One of the best episodes found Honey battling some evil robotized toys, the very sort of plot Steed and friends foiled on a regular basis. Others, of course--as with any Cold War adventure series--featured more traditional espionage plots as well. Honey West lasted for one season of thirty episodes. They're currently available on a Region 2 set in England, but will land Stateside sometime next year courtesy of VCI Entertainment.
Posted by Tanner at 1:06 PM

WOW! This is great news about I Spy and Honey West! I'll look forward to both of these releases.

I've been really wanting to see Honey West. I've always heard so much about it, but never had the chance to see it before. This is awesome news.