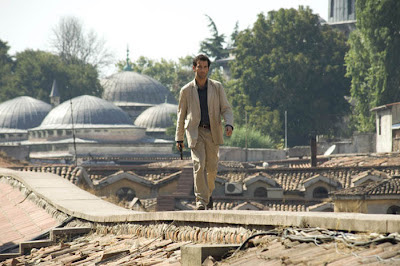 Dark Horizons points the way to some new pictures from Tom Tykwer's upcoming European-set spy thriller The International, starring Clive Owen, Naomi Watts and Armin Mueller-Stahl. The website with the pictures, BlackFilm, also provides a release date (August 15, 2008), and some more plot details than I'd seen mentioned before. The Run Lola Run director alone is reason enough for me to see it (he's long been my number one choice to do a Bond), but the locations they mention sell me even more on the project: Obsessive Interpol agent Owen and Naomi Watts take on the international banking establishment and "follow the money from Berlin to Milan to New York to Istanbul. Finding themselves in a high-stakes chase across the globe, their relentless tenacity puts their own lives at risk as their targets will stop at nothing – even murder – to continue financing terror and war." And that picture really clinches it! (Regular readers will be aware of my particular fondness for good European locations in spy movies...) Opening in that late summer timeslot, this could well shape up to be the Bourne of 2008. Tykwer's certainly got it in him, and Owen was born to be a spy star.
Posted by Tanner at 7:08 PM

I am really looking forward to seeing this. It looks great. Plus I guess this gives us a chance to see Clive Owen as a spy.

True. I think Daniel Craig proved that he was absolutely the right choice for James Bond, but Owen will always be one of those what-if's. And I'm very much looking forward to seeing him play ANY spy role; I think it's a genre he'll fit into perfectly. (I love those BMW short films he did.)

I was thrilled with Daniel Craig's take on Bond in Casino Royale. I can't wait to see him tackle the role again. I do think that there will be that what if question surrounding Clive Owen. I do think Own fits in nicely in espionage films.