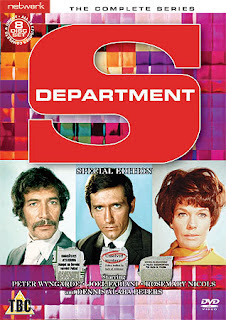 Department S
Due In Britain

It's not just America getting some great new classic spy TV DVDs in 2008... The UK's unrivaled specialty house Network DVD has recently done one of their semi-annual updates of their website, and announced a complete series release of the ITC classic Department S for April 30, 2008. The eight-disc set will include all twenty-eight episodes of the series plus, presumably, the bounty of extra features fans have come to expect from a Network release. No specific features are mentioned yet on the site, but they do provide an enticing clip of a new interview with series star Rosemary Nicols, so that must portend great things... Umbrella released a terrific Department S set in Australia a few years ago, packed with great features like commentaries and original promotional material, but Network seems to have made it their goal to one-up Umbrella with their ITC releases, so we can probably expect even more goodies here.

Department S is, in my estimation, the best of the Avengers knock-offs that ITC produced in the wake of that series' success, and the one that comes closest to the quirky tone of The Avengers. Nicols and Joel Fabiani may get less press than their more flamboyant co-star, Peter Wyngarde, but they're equally crucial to making the show work. (I enjoy Wyngarde's solo spin-off, Jason King, but that show pales in comparison to Department S. King is much better suited to a supporting role than a lead one.) The trio specialize in solving insoluble conundrums, each one contributing a different talent to the team. King brings wits and wit (and a sense of style that may seem questionable in retrospect, but certainly lends the show some flair), Stewart Sullivan (Fabiani) brings fists and levelheadedness, and Annabelle Hurst (Nicols) brings technical-savvy, gorgeousness, and a propensity to strip down to her bra. Department S is not available at all in the US, though Jason King came out from Image earlier this year.
Posted by Tanner at 7:40 PM