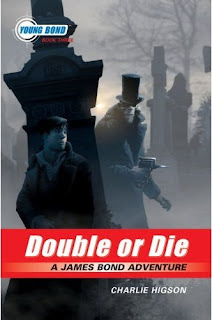 The Young Bond Dossier spotted this excellent new artwork online for the upcoming (and long overdue) American hardcover edition of Charlie Higson's third Young Bond novel, Double Or Die. (Yes, America is just getting around to Number Three even though the fourth, Hurricane Gold, has already been released in the UK.) This cover, by regular Young Bond promotional artist Kev Walker, comes as welcome news after the recent revelation of a fairly lacklustre cover for the upcoming Bond novel Devil May Care.

Nick Fury In The Incredible Hulk?

Aintitcool News runs a rumor that Nick Fury might not only appear in the upcoming Marvel film Iron Man (which itself is still unsubstantiated), but also in The Incredible Hulk! It would be pretty cool to see the one-eyed superspy popping up regularly around the Marvel Film Universe, but I still can't get behind the supposed Sam Jackson casting.

Even though they've now released all the surviving Charlie Chan films starring Warner Oland, Fox will continue to release Chan collections with a brand new set of DVDs starring Sidney Toler in the title role. The Charlie Chan Collection: Volume 4 will be out on February 12, 2008 and include the films Charlie Chan In Honolulu, Charlie Chan In Reno, Charlie Chan At Treasure Island and Charlie Chan in the City of Darkness. The latter is a spy movie set in Paris on the eve of WWII. The set includes more of the incredible extras that have made all of Fox's previous releases in the series such a joy, and seems like a good indication that the studio plans to continue these releases until all the surviving Chans are on DVD. Once WWII hits, most of the Toler entries involve espionage elements.
Posted by Tanner at 11:31 PM

If you get a chance, click on over to my site (www.youngbonddossier.com) and check out Charlie Higson's reaction of the DOD cover art. He gave me a very nice quote. :)