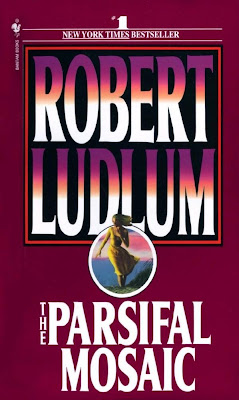 
So first, the good news: there's apparently yet another new Robert Ludlum adaptation in the works--of one of his very best books, The Parsifal Mosaic! Now the bad: instead of being filmed as The Parsifal Mosaic, whose main character is U.S. spy Michael Havelock, it's being adapted as the fourth Bourne film. Is that bad? I'm not sure. Maybe it's good news.


I do like that they're going back to Ludlum, since they haven't really filmed anything he wrote since the opening act of The Bourne Identity... but why not film the actual Bourne books? Ludlum's The Bourne Supremacy was a great book, and since the filmmakers used absolutely nothing of its plot in the movie of that name, they could easily put elements of it in a new Bourne movie with a made-up title. The Hong Kong setting would be a great change of scenery for Matt Damon's Jason Bourne. Then why not use the whole Carlos the Jackal storyline from Ludlum's The Bourne Identity and The Bourne Ultimatum, and make that into its own movie for the fifth entry in the series? (They could easily change the name of the assassin, since Carlos was a real person.) There are enough unused ideas in those three books alone to sustain quite a lengthy cycle of films.


In an interview with Coming Soon (linked from Dark Horizons), Bourne producer Frank Marshall revealed that since he and previously announced writer George Nolfi now have access to the whole Ludlum library (thanks to Universal's recent deal with Ludlum Entertainment), they plan to use The Parsifal Mosaic as the basis for the next Bourne movie, to turn it into a Bourne story. I suppose that Ludlum heroes are usually pretty interchangeable, but Bourne is the exception, and I don't quite see Matt Damon's version of him meshing with the Havelock character, who's certainly more of a romantic.


The Parsifal Mosaic concerns an American spy who discovers that his lover is a double agent, and sees her killed for her betrayal. Much later, he glimpses her alive in Europe, and resolves to get to the bottom of the mystery. It's like the recent French thriller, Tell No One, but with more international intrigue and explosions. I can't quite see Bourne fitting in.


Marshall also reveals that they have no plans whatsoever to adapt the Eric Van Lustbader-penned Bourne sequels, like The Bourne Betrayal. "We want to stay true to the original character," says the producer, which is a bit ironic since the second two movies stray so far from their source material!


So, in short, I'm happy that the Bourne movie producers are going back to Ludlum, and I'm happy that The Parsifal Mosaic will be filmed (if, indeed, the movie does develop along those lines; it's very early in the process right now), but I wish that those things would happen separately, and they'd use Ludlum's unused Bourne material for future Bourne movies!


Meanwhile, Variety reports today that agent Ben Smith will leave ICM to become president of the production arm of Ludlum Entertainment, so it looks like Ludlum CEO Jeffrey Weiner is making good on his recently announced plans to "hire development executives as the company takes an active hand in developing projects, including some not based on books by Ludlum." Ludlum Entertainment is quickly turning into a serious production entity... which is awesome! I'm just surprised they're relinquishing one of their most primo assets to turn into another Bourne movie!


The trade says, "Along with lit agent Henry Morrison, Smith represented the Ludlum estate in ICM-brokered film deals since 2002, most recently making a $3 million MGM deal for The Matarese Circle... ICM will continue to represent Ludlum Entertainment."
Posted by Tanner at 12:07 PM