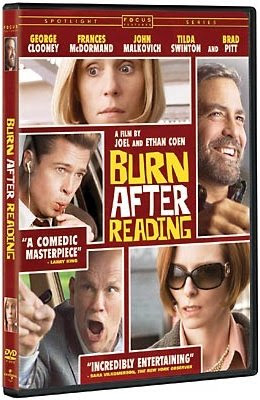 DVD Review: Burn After Reading (2008)
Rewatching the Coen Brothers’ Burn After Reading on DVD, I think I enjoyed it even more than I did when I saw it in the theater and reviewed the film this past fall. Like many of the Coens’ comedies, it’s one of those movies that gets better with repeated viewings. Little throwaway phrases suddenly become hilarious because of their absurdity, or because of their delivery. The brothers wrote these parts specifically for the actors who play them, and that collaboration clearly shows. Often times, their lines are ones that would be hilarious only in those specific hands. For example, a cocktail party conversation about goat cheese and acid reflux has could be very boring... but in the hands of John Malkovich and George Clooney, it becomes absolutely hilarious, purely thanks to their specific line deliveries. They’re not delivering jokes; they’re just having an average, boring cocktail party conversation. But the combination of the Coens’ dialogue and those particular actors’ deliveries somehow form the perfect comedic nexus. Every performance is perfectly nuanced, and every character ideally conceived.

Since I’ve already reviewed the movie itself, I’m going to focus my DVD review primarily on the disc. The extras on Focus Features’ new DVD of Burn After Reading are minimal–but what’s there is actually really good for these EPK sorts of featurettes! Amazingly, Joel and Ethan Coen themselves actually share some interesting tidbits on the genesis of the project, the making of the film, and their way of working with actors–without turning glib. (Usually, the pair refuse to take anything seriously. The results can be hilarious–like the entire joke commentary track on Blood Simple–or incredibly frustrating.) 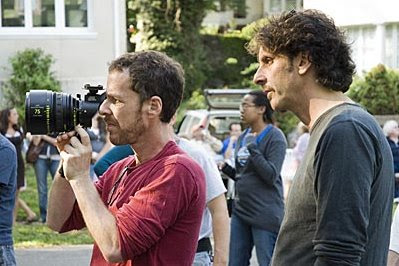 On the twelve-minute featurette "Washington Insiders," the co-directors and co-writers discuss how they achieve that perfect comedy nexus with their stars. I expected this to be one of those flimsy fluff pieces where everyone just says nice things about each other, but it actually proved very interesting. The brothers reveal that they wrote this movie for the specific actors they ended up casting–in many cases, their friends who they had worked with before. That meant the shooting schedule was dictated by when those stars’ busy schedules could come together, so they ended up shooting it after No Country For Old Men even thought the movies were written at the same time. (That in itself is interesting to learn, as the stark, Oscar-winning drama and the breezy spy comedy have more in common than might appear at first glimpse. Besides the similar endings–played for totally different effect–they even feature some similar scenes. As I pointed out in my initial review, the scene with Clooney and Brad Pitt in a bedroom plays like the comedic equivalent the the suspense scene in No Country where Josh Brolin finds himself holed up in a dark hotel room. And in both films, main characters seek approval from aged father figures for decisions to retire or quit–with interestingly different results.) The brothers hadn’t worked with Pitt or Malkovich before, but had their voices very much in mind writing the script. They were anxious for Pitt to, as Joel puts it, "embrace his inner knucklehead." 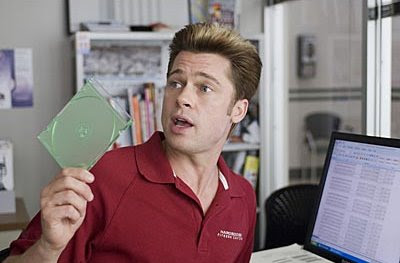 Cosutme designer Mary Zophres has some interesting comments as well, many pertaining to that knucklehead. "How do you make Brad Pitt look like a dork?" she asks, highlighting one of the main challenges of her job. And for people who believe that costume designers don’t have much to do on modern-day pictures, she also provides some pointed insight on the importance of her craft, tracing the arc of Malkovich’s character via his clothes. "It’s the complete demise of a character through his wardrobe," she says, referring to his journey from prim and proper three-piece suits with bowties when he works at the CIA to drunkenly, angrily storming around in his bathrobe and underwear by the end of the movie. "He just lets himself go." 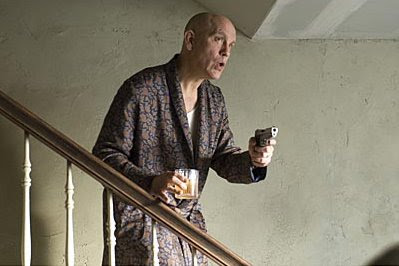 It’s not just the clothes, of course, that make the man in a Coen Brothers movie; the hair always plays a key role as well. "We frequently give actors haircuts that they have to somehow disguise during their off-camera moments for the duration of the show," Joel proudly reveals, referring to Pitt’s hideous frosted pompadour. Finally, Frances McDormand answers the question that everybody wonders about seeing this movie: what did she think when her husband, Joel Coen, first showed her the script and she saw that the part he’d written for her begins: "Close up on a woman’s ass. Bare. White. Middle-aged." You’ll have to check out the feature for that reaction, though...


It’s unclear why George Clooney warrants his own featurette rather than being packed in with the other actors in "Washington Insiders," but he gets it, in the form of the two-minute tribute "Welcome Back George." The Coens discuss their relationship with him, and reveal that there are certain actors who just inspire them to write parts for them again and again. "In George’s case, they all happen to be morons." Zophres returns to discuss her similar challenge to making Brad Pitt look dorky in doing the same thing for former "sexiest man alive" Clooney. Hint: it mostly involves hiking his pants a few inches too high. 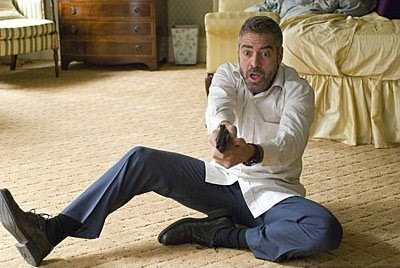 The brothers (always interviewed in tandem) address the spy angle of the movie more in the disc’s third featurette, the five-minute "Finding the Burn." Ethan describes their film as being about "the CIA and physical fitness, and what happens when the two intersect." Joel, the older brother, adds, "That’s really what makes it a Washington story."


"Yeah," chimes Ethan. "Spy stuff and intrigue. That we really haven’t done before. You know, it’s our Tony Scott/Bourne Identity kind of movie, without the explosions." That’s an excellent description of Burn After Reading. It’s a comedy of Washington manners with a Tony Scott spy plot infused on top of it, accentuated by clever details like the cliched "beepy text" titles I discussed at length in my initial review, and a terrific score by Carter Burwell that manages to perfectly parody the familiar chords of a Scott epic, especially in the films’s opening moments, accompanying the beepy text.

Malkovich disagrees slightly, explaining that "the character I play is not a spy; he’s an analyst. So I wouldn’t really say it’s a spy movie. It’s just more about the real world colliding with some tiny part of that world." The collision, of course, is where the real humor comes from. (Well, that and Pitt’s wonderfully exaggerated idiocy!) And that’s what the Coen Brothers thrive on. It’s great to have an intelligent spy comedy from these filmmakers, and even better that it turned out to be so good. I’d rank Burn After Reading among the brothers’ top three films... and among my own favorites of 2008.
Posted by Tanner at 11:01 PM