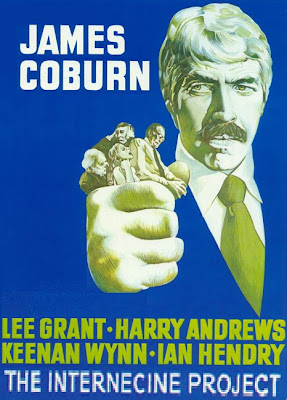 There were several very exciting spy DVD announce-ments yesterday.
The Internecine Project
First, we get a very hard-to-find James Coburn spy movie! While most of Coburn's more famous entries in the genre (the Flint movies, Hudson Hawk and the absolutely essential classic The President's Analyst) are currently available, 1974's The Internecine Project has remained elusive until now. (Though it did get a full-screen only Region 2 release in England.) No longer! DVD Sleuth reports that Code Red will release a Region 1 DVD this summer. "Internecine," by the way, means "pertaining to multiple murders" or "characterized by great slaughter," which actually gives you quite a good idea of what this movie's about. (Weirdly, I recently had occasion to publicly pronounce this word and found it very difficult to put the appropriate emphasis on the "nees" part, wanting for some reason to stress "intern" instead.) Coburn plays a former CIA agent appointed to a flashy new political post. But to get it, he'll have to remove anyone with knowledge of his shadowy past. To do so, he concocts a diabolical plan to get all of his enemies to kill each other. Surprisingly, this dark, dark thriller is directed by one of the five credited directors of 1967's farcical version of Casino Royale, Ken Hughes--and written by Barry Levinson!
Who?
The same article at DVD Sleuth also reveals that Code Red has acquired the rights to the 1973 Elliott Gould/Trevor Howard Cold War thriller Who? The plot mixes espionage and robots--but in a very gritty, serious, Seventies way, not a Sixties Casino Royale/Some Girls Do Way, if you can believe it! That's also scheduled for summer 2009.
The Return of the Man From U.N.C.L.E.
Hurrah! TVShowsOnDVD reports that Paramount will release the 1983 CBS TV movie The Return of the Man From U.N.C.L.E. (aka "The 15 Years Later Affair") on DVD March 3, 2009. Being made for television, the 97-minute feature will naturally be presented in full-screen. Not only should this news thrill U.N.C.L.E. fans (many of whom lamented its omission from Warner's otherwise thoroughly impressive Complete Series box set), but Bond and Avengers fans as well. The movie fittingly co-starred other former spies Patrick Macnee (stepping in as a replacement for U.N.C.L.E. boss Mr. Waverly, owing to Leo G. Carroll's death in 1972) and George Lazenby (as a tuxedoed, Aston Martin-driving secret agent identified only as "JB"). No word at this point on any extras or cover art.
Burn After Reading
Focus Features has moved up the release date of the Coen Brothers' recent, hilarious spy comedy Burn After Reading from the previously-announced December 23 to the new date of Friday, December 21. Despite the unusual day of the week, this move should benefit last-minute Christmas shoppers, and make it more possible for spy fans everywhere to find Burn After Reading in their stocking come the 25th!
Posted by Tanner at 10:42 AM