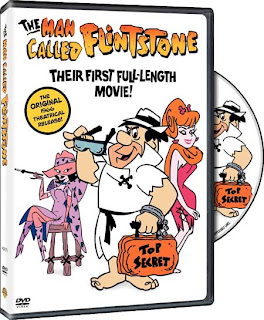 A Flintstones movie? What the--? Would you believe, this is actually a pretty crucial release for people interested in Sixties Bond parodies! So pervasive was Bondmania (and spy fever in general) in 1966 that when it came time for Hanna-Barbera to adapt their popular prime-time toon about cavemen into a movie, the obvious choice was to make it a Bond take-off! The title, of course, is a take-off on another popular Bond-inspired spy movie, Our Man Flint. So was the original theatrical poster, which brilliantly mimicked Bob Peak's classic Flint pose. (Warner didn't use it for the DVD cover; click here to see a side-by-side comparison.) The plot finds caveman Fred Flintstone stepping in for his injured doppelganger, a Stone Age James Bond named Rock Slagg. He and his family (and neighbors the Rubbles) then embark on an adventure across, er, "Eurock," pursued at every turn by the incompetent agents of SMIRK. Today's Warner Brothers release marks the first time The Man Called Flintstone has been available on DVD in Region 1.

The popular stunt/debunking cable series Mythbusters takes on myths perpetrated by James Bond movies in two episodes presented in Mythbusters: Big Blasts, the latest DVD release from Image--along with eight other episodes. In "The James Bond Special, Part 1," the MythBusters create a watch that can deflect a bullet like Bond's could in Live and Let Die, and attempt to recreate 007's spectacular speedboat jump from that movie as well. Then they find out if it's possible to blow up a propane tank by shooting it with a handgun as Bond did in Casino Royale. "In Part 2," according to Image's copy, "Jamie and Adam pack high explosives into an ordinary ballpoint pen, create a deadly bowler hat to see if it could really slice the head off a statue and build giant steel jaws to see if a metal-mouthed super villain could really chomp through steel cables." I saw Part 1, and it was a lot of fun. Read my review of it here.

If you really need Austin Powers in high-def, now you can have him. Today New Line unleashes The Austin Powers Collection: Shadelic Edition Loaded With Extra Mojo on Blu-Ray. I'm not quite sure what that extra Mojo is, but I'd imagine these discs at least contain all the special features of the original DVD releases, including loads of deleted scenes. Hopefully, they also retain that nifty text feature from the original edition of the first (and best) film where Mike Meyers recounts all the various Sixties spy films and series that influenced him.