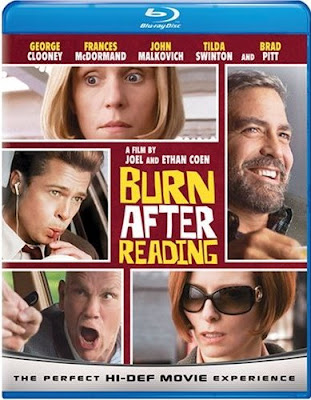 But today is Sunday, not Tuesday! What's going on? Well, thanks to the Christmas holiday, studios are bumping their new product up a few days to entice last-minute holiday shoppers. Among those titles being released today is Focus Features' Burn After Reading, a terrific new spy comedy from the Coen Brothers. Actually, this is the ideal last-minute gift idea for spy fans! (And it's also available in Blu-Ray.) Read my full DVD review here, and my original review of the film here. 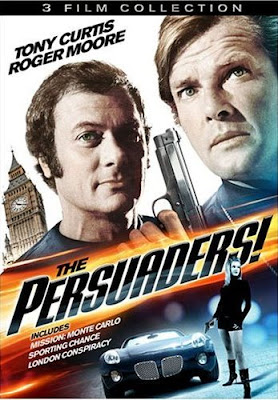 And speaking of Christmas shopping, while I was out doing mine today I stumbled upon an exciting new title that I must have missed when it debuted amongst the Bond-propelled spy glut at the beginning of November: The Persuaders!: 3 Film Collection. This set (which somehow slipped out from LionsGate) collects all three Persuaders! theatrical releases from the early Seventies: Mission: Monte Carlo, Sporting Chance and The London Conspiracy. Bear in mind that each of these so-called "films" is actually two episodes of the TV series edited together for the European theatrical market. Still, this disc will be of extreme interest to American Persuaders! fans because the theatrical versions have never been released in the United States on DVD before. (I believe some of them were included with various foreign DVD sets of the series.) They're notable for featuring different title sequences, though I don't know if there's any actual new footage in the films. (I doubt it.) It's also a good, cheap way for new viewers to sample this incredible Roger Moore/Tony Curtis series (really, one of my favorites ever) without shelling out for the entire sets. Beware, though, because some Amazon user reviews report defective discs. Hopefully this problem has been resolved by now. I think the cover is kind of cool, even though it's a blatant Photoshop creation featuring a cool-looking car that's not even appropriate to the Persuaders! era... but I still can't help wish they'd used some of the incredible poster art that was created for these films! I've spent a long time accumulating them from every country of release, and they're stunning images. Oh well.
Posted by Tanner at 4:58 PM

I think there's an action in Photoshop called "dvd cover"-you just click on it and viola! If they had used
an Aston Martin DB6 or Ferrari Dino instead of whatever model car that was, the cover would be better. Life would be so much better if they did use poster art for covers, foreign or domestic.