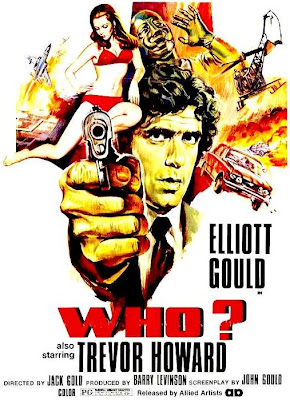 More information has become available on several of the exciting upcoming spy DVDs I've reported on recently. TVShowsOnDVD has some preliminary cover artwork (bland and generic--but still pretty cool because of what it is!) for Paramount's Return of the Man From U.N.C.L.E.: The Fifteen Years Later Affair. The website reports that the DVD will include a trailer and restored color. And Amazon already has a listing.

Code Red DVD's official blog has some more enticing information on the company's upcoming discs of The Internecine Project and Who?, both due this summer: "Both will be from HiDef masters. We are planning on some extras for these titles as well." Can't wait!

I also have some answers to some questions I raised in my report on Acorn Media's forthcoming Region 1 release of the classic Sixties Edward Woodward series Callan. The plan is to follow A&E's model on The Avengers, and start with the first color season (which was actually the third season of the show, which ran for four). Subsequent releases will depend on sales of that one, but assuming it does well, presumably Acorn will follow it up with Season 4, then release the black and white Season 1 and Season 2, as A&E filled in the blanks by putting out the earlier, black and white Avengers episodes after releasing all of the color Diana Rigg episodes. Still no word on how the pilot, "A Magnum For Schneider," the theatrical film or the TV reunion movie will fit into the release pattern, if at all. Look for Acorn's first Callan set sometime this spring.
Posted by Tanner at 3:58 PM

I'm no Callan historian but I've heard that the b/w episodes are either unavailable or similar to the Cathy Gale Avengers episodes where not all have survived.

If they follow Umbrella in Australia's release pattern, they release the third season - and then the fourth, but include the theatrical movie with the fourth series.

A Magnum for Schneider will be the hard one to track down as it was an episode of Armchair Theatre (or something like that).

As such, it may not have survived. It is generally considered that the Callan movie is a remake of MFS. But you know how obsesive I am, so I'd want to see the lot.

I have the first Umbrella release (Season 3), but not the second, so I haven't seen the movie or the pilot, which was indeed an episode of Armchair Theatre. It's my understanding that most of the black and white episodes are available (and are readily available as bootlegs if you're willing to pay steep Ebay prices for unknown quality), though some have been "wiped." I believe the pilot is extant (and on some of those boots), but I have no idea what the rights situation is surrounding it. I'm disappointed that Umbrella didn't include the TV reunion movie "Wet Job" with their 4th Season release! That must be a rights matter, too.

Good to know that most of the episodes exist in one form or another. Maybe Acorn can do a better job with this than the lame job A&E did with The Saint.