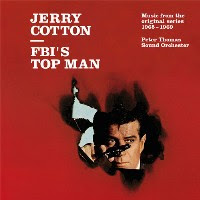 Jerry Cotton Soundtrack Back In Print

Johann at the Eurospy Forum has sounded the alert that Peter Thomas's wonderful, jazzy music for the Jerry Cotton Eurospy series will be reissued on CD on March 12 to coincide with the release of the new Jerry Cotton movie in Germany. The music was previously available on a great, long out-of-print two-disc set called 100% Cotton

, contains only twenty-eight. However, six of those are previously unreleased and two more were not on the original CD, and only previously available on a rare vinyl issue. So to have every possible piece of Jerry Cotton music available, a Eurospy fan would need to track down both CD releases. But just to have a good sampling of the score music, the Beat Records release seems like a good bet, and as added incentive, Beat's website claims all the tracks are remastered and the disc will come with a 24-page booklet (in German and English). Thomas's music isn't typical, Barryesque spy music; it's unique, it's jazzy and it's lots of fun! Perhaps the best compliment I can pay these scores actually comes from my girlfriend. When she heard the CD playing in my car once, she was surprised and said, "I thought those movies were low budget?" Indeed, there's nothing low budget-sounding about Thomas's music, and it elevates the films.

This sounds way cool. I've put my pre-order in right after reading this post. I'm not overly familiar with the films (I know they exist, but I haven't seen any), but I'm very intrigued by the jazzy aspects of the score.

It's being released by German label All Score Media and not Beat Records...

Thanks, Magnus! I'll update the post. That's a great link, too. I like that it lets you know which tracks are new and tells you which are from which film. I'll definitely be downloading those two "download-only" new tracks!

Bish, you won't regret ordering this album! Knowing your musical tastes from your own site, I think it will be right up your alley.

Yes I'm really looking forward to this one! One of the producers of this disc sent me the previously unreleased track RED ROBIN BOSSA a while ago - and it's really great!