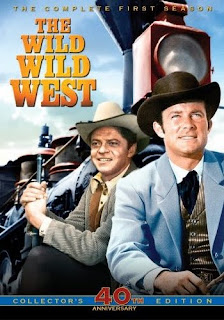 Hm, I've given away all sorts of Wild Wild West DVDs before, but never Season 1

.  How about now?  While all fans probably have their own preference as to favorite season, there's not really much debate that this is the best DVD release of the lot.  It's the only one with special features!  And they're pretty great features, including audio introductions to every episode (a whopping twenty-eight of them!) from star Robert Conrad, audio interviews with cast and crew, network promos and bumpers, artwork, a commercial and more.  Personally, I'm torn between Season 1 and Season 2 for my favorite, but the black and white episodes in Season 1 of this very Avengersy spy Western are almost uniformly fantastic. All you have to do to enter to win this brand new, sealed copy of the Paramount DVD set is send an email with the subject heading "WWW Season 1" including your name and mailing address to the Double O Section by midnight, Pacific Time on Monday, February 8, 2010. The winner will be announced next Tuesday, February 9. Good luck!
The Complete First Season

came out before I started this blog, so I never reviewed it here (guess I need to revisit that!), but you can still...
Read my review of The Wild Wild West - The Second Season

Read my review of The Wild Wild West - The Third Season
Read my review of The Wild Wild West - The Fourth Season
*The Fine Print: One entry per person, please. Double entries will be disqualified. One winner will be drawn at random and announced on Tuesday, February 8, 2010. The winner's name will be posted here and he or she will be notified via email. All entries will be deleted immediately after the contest’s close, and no personal information will be retained or transmitted to any third parties. The contest is open to anyone, in any country, but foreign readers should note that this is a Region 1 NTSC release and be sure they have the proper equipment for playback. Unfortunately, the Double O Section cannot assume responsibility for items lost or damaged in transit.
Posted by Tanner at 6:44 PM

Looking at your vivid frame captures, it struck me at how 60's tv series were more technically
polished than shows from the 70's. Despite the lower budgets, lighting, camera angles, and music where still given that Golden-Aged Hollywood sheen.