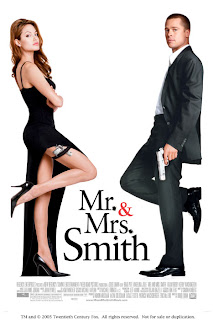 film–without star couple Brad Pitt and Angelina Jolie. The Vulture calls it a reboot, which certainly fits the current mania, but the actual concept, as described, doesn't really sound like a reboot to me.  The non-sequel would be called Jones and, according to the blog, would focus on a Mr. and Mrs. Smith-like "pair of twentysomething spies are set up as a fake married couple when they graduate agency training."  Of course, the original Mr. and Mrs. Smith weren't technically spies; they were assassins, but it's ultimately the same difference, right?  Akiva Goldsman, who produced the original and mentored its screenwriter Simon Kinberg, will once again produce.  There is no mention of Kinberg's or director Doug Liman's involvement.

Everywhere I look I see a tabloid screaming that Brad Pitt and Angelina Jolie are breaking up. While I normally pay little heed to celebrity gossip, I do get a pang every time I see those rumors and think they mean we'll never see the Mr. & Mrs. Smith sequel (the idea, for better or for worse, was that they'd have a kid) that was mooted as soon as the first movie proved a hit.  According to The Vulture's Claude Brodesser-Akner (formerly of Variety and still the host of NPR's "The Treatment"), a rocky relationship between the stars (true or false) isn't the only reason we'll never see that sequel.  "The real reason," he says, "is economic. One of the root rationales behind Hollywood's reboot fever is that by ditching pricey talent but extending popular name-brand franchises, they get the best of both worlds: a title people know and like, with stars they can afford."

It should be noted that this is not the first time Fox has attempted to extend this particular franchise with younger, more affordable stars.  In early 2007, a TV pilot was shot with Martin Henderson and Jordanna Brewster playing John and Jane Smith.  (Full details here.)  That pilot was written by Kinberg and directed by Liman, and was sadly never picked up (despite brief, renewed hope).  Perhaps it may yet show up as a bonus feature on a future Blu-ray reissue of the original film; I hope so, as I'd love to see it!
Posted by Tanner at 4:46 PM