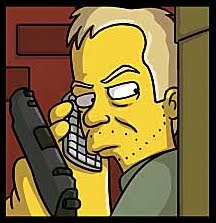 Mission: Impossible, The Saint, The Avengers, The Wild Wild West, I Spy, Get Smart... all great shows; most pretty awful movies. And now, yet another spy TV show is being recycled as a film.  The twist is, this one's still on the air–and the movie will feature the show's original cast!  Variety reported earlier this week that Jack Bauer is finally coming to the big screen–and courtesy of Billy Ray, no less, writer (and director) of one of the better "realistic" spy movies of the past decade, Breach

movie has been mooted for years, and apparently Ray's pitch impressed Fox execs as well as Kiefer Sutherland and Brian Grazer, both of whom would produce the film.  Presumably, a theatrical film will be significantly better than the TV movie, 24: Redemption, that served as a prequel to the show's seventh season.

Personally, I've long wanted to see Jack Bauer make the leap to the big screen, and hoped for a drastic change of location–ideally Europe.  The super-intense Bauer is a strong enough character in Sutherland's hands to easily carry a film franchise.  I hope that Ray's script drops the real time conceit altogether; Bauer is also a strong enough character that he doesn't require that gimmick. It seems likely that the movie won't stick to the TV show's famous digital countdown but will still feature a ticking clock element; Sutherland told Entertainment Weekly last month that a 24 movie "would be a two-hour representation of a day."  That's fine.  I don't think the movie even needs that, though.  I'd pay to go see Jack Bauer jet off all around the world like James Bond or Ethan Hunt, getting into actiony scrapes and demonstrating his trademark badassery wherever he goes.  (Obviously, intercontinental air travel doesn't work in a real-time TV format; one flight would last half the season.)

Meanwhile, as Agent Bauer prepares to make the leap to the big screen, is his small screen time finally running out?  The Hollywood Reporter thinks so.  The trade speculates that the movement on a possible feature signals that "this might be the Bauer’s final real-time day-long adventure." While the show still performs well in its eighth season (down ten percent from last year, it's still the third-highest rated drama on Fox), "24 is pricey to produce and has little syndication value."  The Reporter's James Hibberd gives it 40% odds of returning for a ninth season.
Posted by Tanner at 10:14 AM