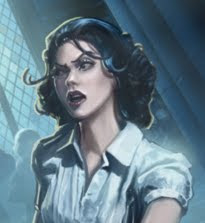 Hot on the heels of giving us our first glimpse at Kev Walker's awesome cover art for the upcoming UK paperback edition of Danger Society: The Young Bond Dossier, today the our friends at the website the Young Bond Dossier (as opposed to the book) deliver the cover artwork for the forthcoming American hardcover edition

of the final book in Charlie Higson's first cycle of James Bond novels, By Royal Command.  And... I'm afraid this one's kind of a letdown.  For some reason, publisher Disney/Hyperion has not hired Walker to do the final cover in the series.  (To date, Walker has handled all representational artwork for this series, on book covers, promotional pieces and even a graphic novel adaptation

of the first novel, Silverfin.)  Instead, we get perfectly serviceable cover art by Owen Richardson–but it's not the same.  It doesn't match the rest of the series.  Not only does it not look like Kev Walker's art; it looks too much like it's trying to look like Kev Walker's art!  Once the publisher opted to go with another artist (for whatever reason; perhaps Walker was unavailable), I think they should have let him do his own thing and the results might have been better.  Instead, this piece echoes the composition of Walker's covers... but it's slightly off.  I really don't understand why the same publisher that rejacketed the first two books so that they would have uniform paperbacks for the whole series would change things up with the final entry!  I was looking forward to a matching set of Walker-jacketed books.  Oh well.

To focus on the positive, Richardson's artwork certainly isn't bad; it's just not what we're used to.  I really like the artist's style (although it seems to have been somewhat altered in a vain attempt to match Walker's); it's very pulpy.  I like that this Young Bond looks decidedly older than he did on the last cover (appropriate, given his age and what he's been through in the course of the series) and I like that Richardson's depiction of Bond Girl Roan Power reminds me of the Bond Girls on the classic Pan paperback covers of the 1950s.

Anyway, head on over to the Young Bond Dossier to see the full cover for yourself, in all its high-res glory.

By Royal Command comes out in the US on May 18, and can be preordered on Amazon